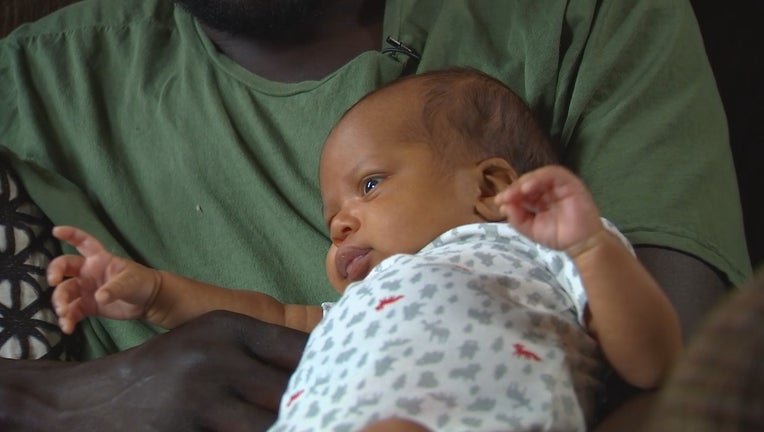 ST. PAUL, Minn. (FOX 9) - A rare discovery on a St. Paul mother’s 20-week ultrasound forced a family to make the tough decision for their baby to undergo surgery in utero.

There’s incredible excitement ahead of a baby’s birth. but sometimes, those 40 weeks don’t always go as planned.

A rare discovery on a St. Paul mother’s 20-week ultrasound forced a family to make the tough decision for their baby to undergo surgery in utero.

Trina and Bak Bak learned extra tissue was blocking their baby’s bladder, so no urine was passing through, meaning no amniotic fluid created to help the baby develop.

"He pointed out on one of the photos the bladder was really enlarged, it was like the size of his head, and at 20 weeks you’re not really even supposed to see the bladder," said Trina.

The couple would soon learn that the rare birth defect would mean their unborn baby might not survive without some medical intervention.

They met with Dr. Saul Snowise, the medical director at the Midwest Fetal Care Center, a partnership between Allina Health and Children's Minnesota.

"The long and short of it is, without that fluid around the baby it can be lethal to the baby if it isn’t treated," said Dr. Snowise.

Dr. Snowise explained baby Jabari needs that fluid to help develop the lungs and if the lungs aren’t developed, the infant won’t be able to breathe. Their option was an in utero surgery, where a shunt would be inserted into the baby’s bladder.

"What we want to do is create a bypass, allow the urine to get to the amniotic cavity to allow the lungs to develop and for the pregnancy to continue," said Dr. Snowise.

The procedure was done at 21 weeks, at the Midwest Fetal Care Center in Minneapolis. Dr. Snowise used an amniocentesis needle to go through Trina’s abdomen, through the uterine wall and then inserted the shunt into the baby’s bladder, guided completely by live ultrasound images.

The surgery was successful and baby Jabari, whose name means Brave, was born at 34 weeks with fully developed lungs.

"Going from we were going to lose him to actually seeing him," said father Bak Bak. "I cannot explain that I was trying not to cry in front of a million doctors."

He's had to have one surgery since his birth and will need another when he’s older but Jabari’s future looks bright.

"We are just glad he is healthy and safe," said Bak.

"It’s a true privilege to partake in this and give patients who otherwise might not have had hope for any type of outcome to actually have good outcomes and good long-term outcomes," said Dr. Snowise.