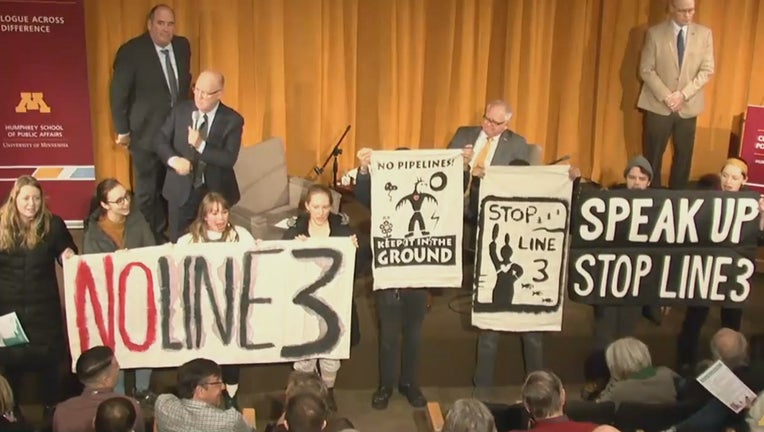 MINNEAPOLIS (FOX 9) - Gov. Tim Walz was twice interrupted by protesters, at one point having to leave the stage during a forum at the University of Minnesota’s Humphrey School of Public Affairs on Friday.

Walz briefly left the stage after several minutes of chanting and disruption by anti-police activists. Police got the people to leave, and Walz returned, noting their “passion and anguish” on the issue.

Later, the governor was interrupted again by people opposing Enbridge Energy’s planned Line 3 pipeline in northern Minnesota. Walz engaged with the people, but they continued chanting.

"Do you want me to stop the pipeline?" Walz asked, to which protesters said they did. "Under what authority? I just said, I do not have that authority."

Line 3 has been slowed by legal challenges that Walz has allowed to continue, in addition to regulatory review. The governor said the judicial and regulatory processes should play out.

"This is very dangerous thinking to say, I can arbitrarily go outside what is not the constitutional power, the legal power, of the governor to be able to (stop Line 3). That's dangerous," Walz said.

Later in the forum, the governor blasted legislative Republicans over recently unveiled proposals to cut taxes and crack down on crime in the Twin Cities.

Senate Republicans said Thursday that they wanted to cut Minnesota’s lowest income tax bracket to 4.9 percent from 5.35 percent, saving a maximum of $118 for an individual taxpayer. Another GOP proposal would eliminate the state’s tax on Social Security income, which would benefit people who have additional investment income.

"I think it's incumbent on me not to close doors before they've been fully debated, but it's a pretty heavy lift for me to see that makes sense,” Walz said.

House Republicans have offered legislation that would add more police and cameras on light rail lines in response to crime concerns, but Walz said the GOP’s talking points were “very dangerous” because they were telling people they shouldn’t feel safe in Minneapolis and St. Paul.

Walz, who supports U.S. Sen. Amy Klobuchar for president, said he would back U.S. Sen. Bernie Sanders if he gets the Democratic nomination. Other Democratic elected officials have raised concerns about Sanders, a self-described Democratic socialist.

There are no restrictions on what the parties can do with those lists. Several bills have been filed in the Legislature to impose restrictions, and Walz said if it were up to him, he would keep voters’ affiliation private.

“I'm super uncomfortable when I have judges calling me and telling me, governor, I'm not going to be able to vote” because of the possibility of their affiliation becoming public, Walz said.