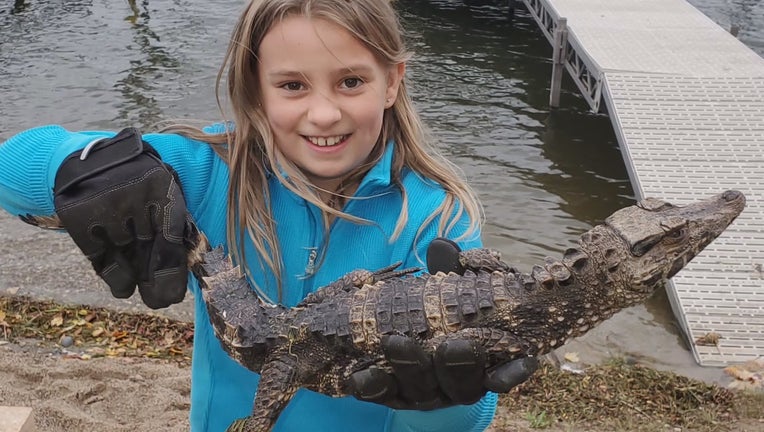 Quinlynn Lehrnann holds up the alligator her family says they found along Prior Lake, Minn.

PRIOR LAKE, Minn. (FOX 9) - In October, 9-year-old Quinlynn Lehrnann says she found a dead alligator on the shores of Prior Lake near her grandparent’s home.

“It was kind of camouflaged in with the seaweed so it kind of looked like seaweed and then I took a closer look and it was an alligator,” Quinlynn said.

In October, 9-year-old Quinlynn Lehrnann says she found a dead alligator on the shores of Prior Lake near her grandparent’s home.&nbsp;

She showed the rest of her family who, at first, had a hard time believing an alligator would be anywhere near Minnesota.

“I mean I thought it was a hoax at first when I got the picture but when I came down here it was real,” Quinlynn’s grandma Connie Peer said.

After naming the alleged alligator “Mr. Chopps” the family says they called the Minnesota Department of Natural Resources to have them come check out what they had found.

Peer says the DNR officer who came to their home told them the animal could have been a pet that escaped or was let go in the lake. They told her if it was a pet, the owner would be required to have a license.

The Minnesota Department of Natural Resources did not immediately respond to FOX 9’s request for comment about the alligator.

Quinlynn is hoping she will get the animal back from the DNR after testing so she can turn it into a keepsake.

“I want to get it taxidermied,” Quinlynn said.

“This was probably the best MEA break she could ever have. She has learned so much,” Peer said.

Requirements from the Minnesota Board of Health