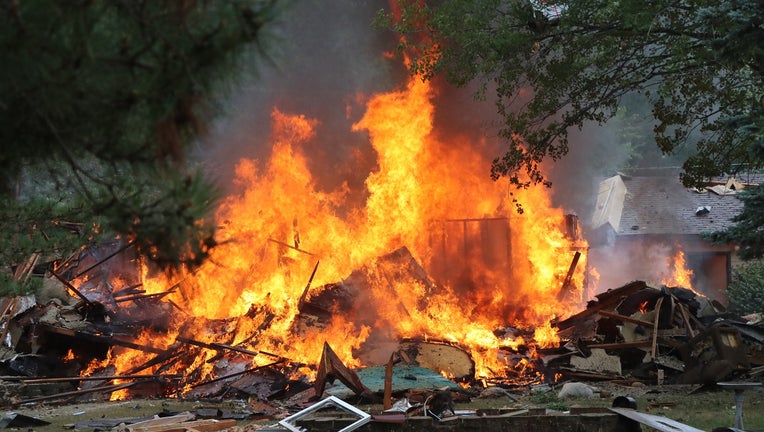 A photo from the Union-Times in Princeton, Minnesota shows the damage left behind after an apparent home explosion on Thursday. (Union-Times / Supplied)

PRINCETON, Minn. (FOX 9) - A man has died after a home was leveled in an explosion Thursday afternoon in Princeton, Minnesota.

Police say they responded shortly after noon on Thursday to the explosion on the 1000 block of 8th Avenue North in Princeton. At the scene, they found a collapsed home and two injured residents outside the remaining structure.

A man has died after a home was leveled in an explosion Thursday afternoon in Princeton, Minnesota.

The victims, a 39-year-old woman, and a 59-year-old man, told first responders that another man was still inside the home.

Fire crews quickly worked to knock down flames and found the third victim dead in the rubble. The other two victims were taken to Fairview Northland in Princeton for treatment. The severity of their injuries are not yet known.

Video from our chopper shows the damage left by a home explosion on Thursday in Princeton, Minnesota.

An investigation is currently underway at the explosion scene. The Minnesota State Fire Marshal's Office is assisting the local fire and police departments along with Center Point Energy. The cause of the explosion has not yet been released by authorities. However, in a GoFundMe created by a friend, the family says natural gas was the cause the blast.