VATICAN CITY (AP) — Pope Francis on Friday made a historic apology to Indigenous Peoples for the "deplorable" abuses they suffered in Canada’s Catholic-run residential schools and said he hoped to visit Canada in late July to deliver the apology in person to survivors of the church's misguided missionary zeal.

Francis begged forgiveness during an audience with dozens of members of the Metis, Inuit and First Nations communities who came to Rome seeking a papal apology and a commitment for the Catholic Church to repair the damage. The first pope from the Americas said he hoped to visit Canada around the Feast of St. Anna, which falls on July 26 and is dedicated to Christ's grandmother.

More than 150,000 native children in Canada were forced to attend state-funded Christian schools from the 19th century until the 1970s in an effort to isolate them from the influence of their homes and culture. The aim was to Christianize and assimilate them into mainstream society, which previous Canadian governments considered superior. 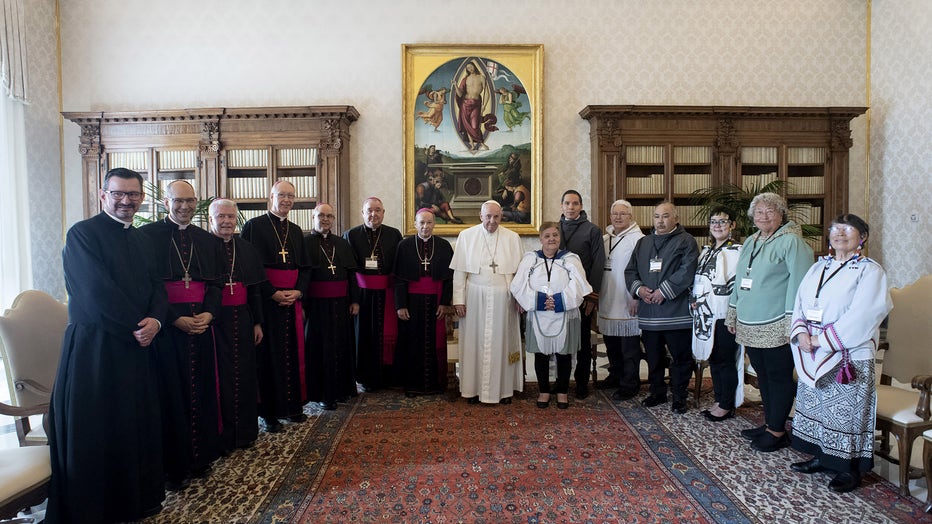 VATICAN CITY, VATICAN - MARCH 28: Pope Francis poses with delegations of Canada’s Métis and Inuit peoples, members of the Métis Nation accompanied by several Bishops from the Canadian Catholic Bishops’ Conference during an audience at the Apostolic P

The Canadian government has admitted that physical and sexual abuse was rampant at the schools, with students beaten for speaking their native languages. That legacy of that abuse and isolation from family has been cited by Indigenous leaders as a root cause of the epidemic rates of alcohol and drug addiction now on Canadian reservations.

After hearing their stories all week, Francis told the Indigenous that the colonial project ripped children from their families, cutting off roots, traditions and culture and provoking inter-generational trauma that is still being felt today. He said it was a "counter-witness" to the same Gospel that the residential school system purported to uphold. 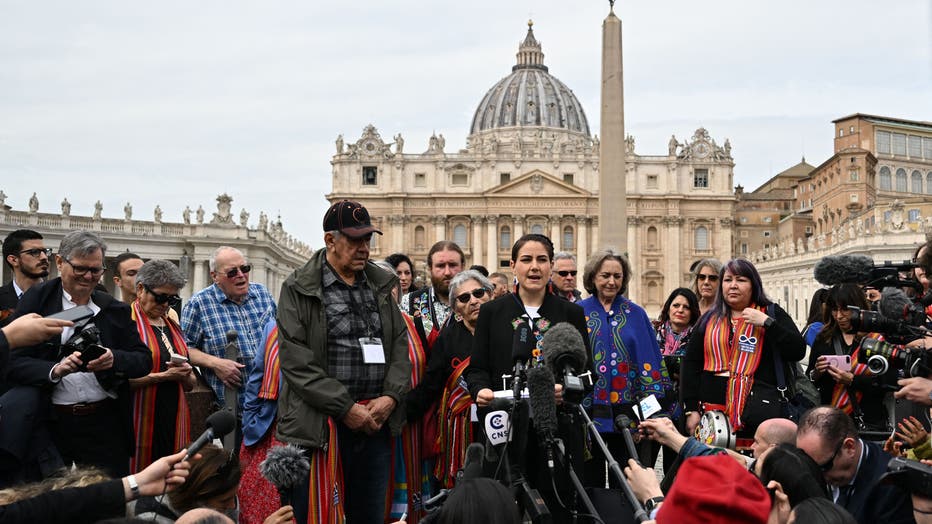 Canada's Metis National Council President, Cassidy Caron (C), escorted by delegations members, addresses the media on March 28, 2022 at St. Peter's square in The Vatican, following a meeting with the Pope, as part of a series of a week-long meetings

"For the deplorable conduct of those members of the Catholic Church, I ask forgiveness of the Lord," Francis said. "And I want to tell you from my heart, that I am greatly pained. And I unite myself with the Canadian bishops in apologizing."

The trip to Rome by the Indigenous was years in the making but gained momentum last year after the discovery of hundreds of unmarked graves outside some of the residential schools in Canada. The three groups of Indigenous met separately with Francis over several hours this week, telling him their stories, culminating with Friday's audience.

Francis spoke in Italian and the Indigenous read his remarks in English translations. The president of the Metis National Council, Cassidy Caron, said the Metis elder sitting next her burst into tears upon hearing what she said was a long-overdue apology.

"The pope's words today were historic, to be sure. They were necessary, and I appreciate them deeply," Caron told reporters in St. Peter's Square. "And I now look forward to the pope's visit to Canada, where he can offer those sincere words of apology directly to our survivors and their families, whose acceptance and healing ultimately matters most."

The spiritual adviser of the Assembly of First Nations' delegation, Elder Fred Kelley, echoed the sentiment.

"Today is a day that we’ve been waiting for. And certainly one that will be uplifted in our history," he said. "It’s a historical first step, however, only a first step."

He and other Indigenous leaders said there was far more for the church to do on the path of reconciliation, but that for now Indigenous leaders insisted on being involved in organizing the papal visit to make sure Francis stops in places that hold spiritual importance to their people.

Natan Obed, president of the Inuit Tapiriit Kanatami, thanked Francis for addressing all the issues the Indigenous had brought to him. "And he did so in a way that really showed his empathy towards the indigenous people of Canada," he said. 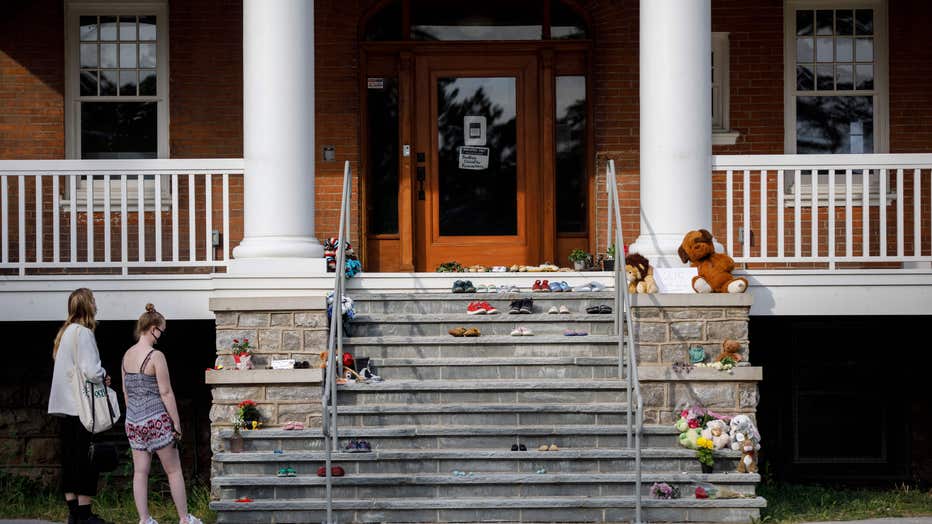 People stand in front of a makeshift memorial to honor the children whose remains were found in a mass grave at The Mohawk Institute, a former residential school for First Nation kids, in Brantford, Ontario, Canada on May 31, 2021. (Photo by Cole BUR

Last May, the Tk’emlups te Secwepemc Nation announced the discovery of 215 gravesites near Kamloops, British Columbia, that were found using ground-penetrating radar. It was Canada’s largest Indigenous residential school and the discovery of the graves was the first of numerous, similar grim sites across the country.

Francis said he felt shame for the role that Catholic educators had played in the harm, "in the abuse and disrespect for your identity, your culture and even your spiritual values," he said. "It is evident that the contents of the faith cannot be transmitted in a way that is extraneous to the faith itself."

"It is chilling to think of determined efforts to instill a sense of inferiority, to rob people of their cultural identity, to sever their roots, and to consider all the personal and social effects that this continues to entail: unresolved traumas that have become inter-generational traumas," he said.

After the papal apology, the audience continued with joyous performances of Indigenous prayers by drummers, dancers and fiddlers that Francis watched, applauded and gave a thumbs up to. The Indigenous then presented him with gifts, including snowshoes.

Francis' apology went far beyond what Pope Benedict XVI had offered in 2009 when an Assembly of First Nations delegation visited. At the time, Benedict only expressed his "sorrow at the anguish caused by the deplorable conduct of some members of the church." But he did not apologize.

The Argentine pope is no stranger to offering apologies for his own errors and for what he himself has termed the "crimes" of the institutional church. Most significantly, during a 2015 visit to Bolivia, he apologized for the sins, crimes and offenses committed by the church against Indigenous Peoples during the colonial-era conquest of the Americas.

He made clear those same colonial crimes occurred far more recently in Canada at the Catholic-run residential schools.

"Your identity and culture has been wounded, many families separated, many children have become victims of this homogenization action, supported by the idea that progress occurs through ideological colonization, according to programs studied at the table rather than respecting the lives of peoples," he said.