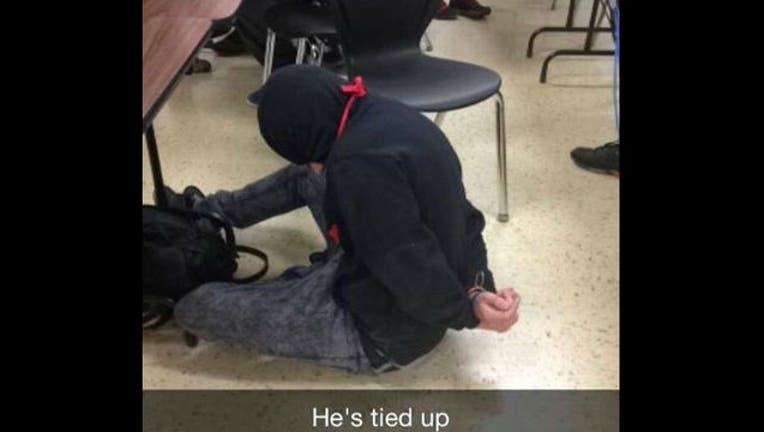 Bullies did this to my son today at school in a classroom with a teacher present who did nothing about it for 40 minutes. Tied up and on the floor with his hoody [sic] tied sound his face and neck for 40 minutes! Two of the bullies are 18 one is 17 my son is 15. Police say there is no criminal activity here! Apparently it's okay to tie children up in school. Please share and pass on I want all of mn to see this. Bullying policies are NOT working!

As of this morning, Nicolette's post had been shared more than 14,000 times.

Osakis schools Superintendent Superintendent Joe Broderick called us back this afternoon, but, citing data pravacy regulations, didn't say much in response to our questions.

Broderick did confirm that the incident involving Kostrzewski is being investigated by the district, but couldn't provide a timetable of when the results of the investigation will be released.

He also wouldn't comment on the Rocheforts' allegation that their son has been repeatedly bullied.

We also spoke with a part-time custodian at Osakis High School who claims the alleged bullying was a hoax.

Citing his desire to remain employed, the custodian requested we not use his name, but says, "The kids at school have been saying the kid who was tied up was in on it."

The custodian adds that teacher Kyle Kostrzewski was away from his classroom for just a few minutes to tend to an emergency elsewhere in the school -- other sources tell us a fire alarm went off at the time -- and when he returned, the 15-year-old freshman was tied up.

"To be honest it's all a big joke, and a big deal made out of nothing, simply because of the technology age we live in," he says.