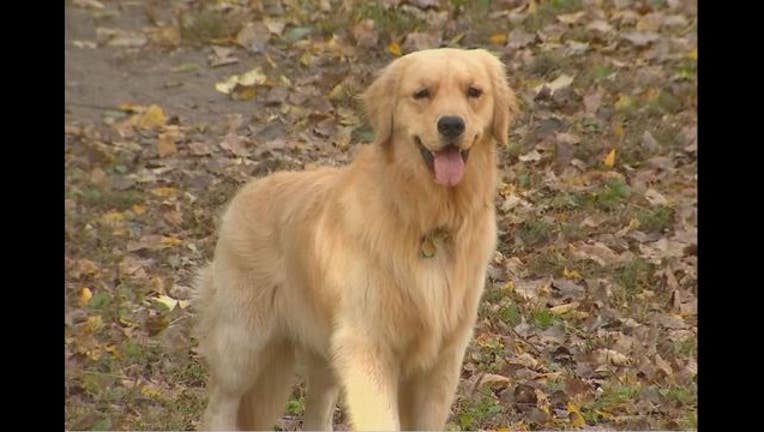 FRISCO, Colo. (AP) - The only signs of aging the 12-year-old golden retriever/ Australian shepherd mix shows are the gray hairs peppered throughout his mostly black coat. He has an obvious limp, but it's hard to expect anything different for a dog only sporting three legs. The loveable 60-pound mutt named Aspen easily bounces from one room to the next in his Summit Cove home, showing no signs of pain when going from lying down to "sitting pretty" on his hind legs when he expects a treat. Aspen is almost a year past what he was expected to live after his diagnosis with a terminal illness, and other than missing one of his limbs, you wouldn't be able to tell.

SEARCHING FOR HELP AFTER A DIFFICULT DIAGNOSIS: About 12 years ago in Denver, Andy Demaline's roommate came home with a 3-month-old puppy he purchased from the back of a truck in a parking lot. With one dog already, the roommate quickly discovered that he wasn't able to handle both, and within a week, Demaline had taken the puppy as his own.

Aspen was at Demaline's side for a move to Florida, back to Summit County, meeting and marrying his wife, Lauren Forcey -- he was even in the wedding. Aspen was there when they bought their first house together -- all the major life changes that a faithful dog participates in next to his human companion.

So it could only be expected that the couple was devastated when they heard the dreaded word that no one ever, anywhere, wants to hear: cancer. X-rays revealed Aspen had bone cancer in his left leg in December 2016, after he was taken to the vet a couple times for a limp that wouldn't go away. The vet gave them three options: amputate the leg, amputation combined with chemotherapy or load him up on pain medications and hope for the best. With amputation he was expected to live another three or four months. With pain medication he would probably only see about a month or two. An expensive option, amputation plus chemotherapy gave him the longest expectancy, but it would still only ward off the cancer for maybe a year.

Forcey and Demaline decided on amputation only, the best option to help minimize the dog's pain, and Aspen had the surgery on Jan. 2, 2017. Demaline scoured the internet for information on pet cancer. One thing he kept coming across was cannabidiol, or CBD, found naturally in cannabis plants. Success stories for both humans and animals for a variety of conditions pushed the couple to pursue the treatment option for Aspen, with hopes that at minimum it would help ease his pain, at best it would slow the growth or even kill cancer cells.

CBD FOR PETS: Cannabidiol is one of the active cannabinoids identified in cannabis that has recently been receiving attention for its therapeutic potential. It lacks the psychoactive effects of THC, which is important when treating pets. Companies are jumping on the CBD bandwagon, routinely offering new products infused with CBD -- sprays, oils, edibles, lotions, protein powders, pet treats, lip balm -- touting relief from pain and inflammation, seizures, anxiety, nausea and aiding in weight loss.

At Farmers Korner Veterinary Hospital in Breckenridge, veterinarian Denisa Court said she has clients who ask her about CBD for their pets' ailments almost daily. Her advice depends on the dog's health and medical problems.

"My opinion is that there are likely medical benefits of CBD products for our patients," she said. "With more research we can feel confident about their benefits and risks and then incorporate CBD therapy into our patient's overall treatment plan."

To date, she said, there are no published scientific studies documenting medical benefits and potential risks of CBD therapy in dogs and cats, although there are two studies currently underway evaluating potential benefits for epileptic dogs not responding to available anti-seizure therapies.

While anecdotally there have been success stories, Court warns that pets respond differently than people to many drugs and some foods, so there is a potential for negative effects when using these products.

While Court will discuss CBD products with clients in more detail if the pet owner expresses an interest, she does not prescribe CBD therapy.

"Legally, as CBD products are schedule I controlled substances, veterinarians working in clinical practice are not allowed to dispense or possess any types of schedule I substances."

Breckenridge resident Deanna Carew first began using CBD products for a Siberian husky who had gone through two knee surgeries plus a back surgery and had severe anxiety during thunderstorms. She noticed once he was on it his reactions had calmed.

"With the arthritis I can assume he felt better, I think it helped," Carew said. "With the thunderstorms and anxiety, I know it helped."

A GROWING BUT UNREGULATED INDUSTRY: Dr. James Gaynor, who specializes in anesthesiology and pain management at Peak Performance Veterinary Group in Frisco, said clients first started asking him about using CBD around 2014.

He felt the potential to help was there, but it was a little dicey because animals have such a low toxic threshold for THC, and many of the oils were alcohol-based. As more hemp-based products became available, he found there was still variability between what was in different products, and even the effects with the same product. This is one reason why he can't offer his clients advice on dosing instructions. He contacted the manufacturers, but ran into roadblocks with companies citing proprietary formulation.

"In the nutraceutical world, there's a problem because there's not much oversight . what they say is on the label, may not truly be what's in it," he said.

Frustrated that he couldn't give his clients a definitive answer on what products are best for their pets, he created his own CBD product in 2017 called Peak Therapeutics.

"From a pain management perspective . there is a relationship to the mechanism of action that is similar to opioids, narcotics," Gaynor said. "They work through different receptors, but those receptors work through the same signaling system. So there's no surprise they can produce good pain relief."

Gaynor typically uses CBD as an adjunct to other pain relievers and anti-inflammatories.

"In my world, its role is second or third tier," he said.

Gaynor cautions that veterinarians have to be careful not to give pet owners false hope with a new product that they don't know much about.

"I always tell people, this is not the silver bullet," Gaynor said. "This isn't the magic cure for everything. It has the potential to do a lot of things. . It's just going to take time to figure all of that out."

NOT ALL CBDS ARE CREATED EQUAL: Veterinarians Court and Gaynor both stressed the importance of choosing the right CBD product.

"There are tests performed by the FDA that have found many products did not have the amount of CBD that they claimed were in the product and some products had no CBD detected at all," Court said.

It's important to purchase a hemp-based product over one created with marijuana, but hemp can be grown in areas where there is soil contamination. What pet owners need to look for, Gaynor said, is if a company can provide a laboratory analysis of what is in the product.

Steve Smith, president and co-founder of Pet Releaf -- a company based in Littleton, Colorado, that creates CBD products for pets -- said the hemp plant is a bioaccumulator, which means it sucks everything from the soil into the plant. Some countries use hemp plants for phytoremediation -- to pull toxins and contaminants from the soil.

Smith, who started the company in the early days of CBD products six years ago, recommends pet owners purchase items from a pet store over a dispensary, and spend some time researching the product.

"The number one thing people should ask is where was the hemp grown, and can you prove it," he said.

A MIRACULOUS RECOVERY: Forcey and Demaline started Aspen on CBD treatments right after the surgery to amputate his leg, along with the additions of flax seed and turmeric supplements and a slight diet change. While they have no way of knowing for sure whether the product has helped his pain or done anything to treat the cancer, they do know they have been given almost an entire year of additional time with Aspen.

On April 2 -- 15 months after amputation -- the couple took Aspen to the vet and had an X-ray done on his chest and remaining front leg to check for cancer. They all came back clean -- Aspen is cancer free.

They've decided to leave Aspen on the CBD treatments, and have also decided to start giving CBD oil to their other dog, Sammy, for her arthritis.

"While we would love to know how and why we've had so much extra time with Aspen, I don't think anyone can definitively say why that is," Forcey said. "Perhaps the cancer was caught in time and fully removed from his body when they amputated his leg with the tumor. Maybe the CBD/THCa (inactive THC) really did clear the cancer out of his system after the surgery, or maybe his genes were strong enough to do the work.

"However, I am quite sure that the CBD has allowed him to stay comfortable and relatively pain-free throughout his recovery and has kept him the happy, lovable guy that we've always known."