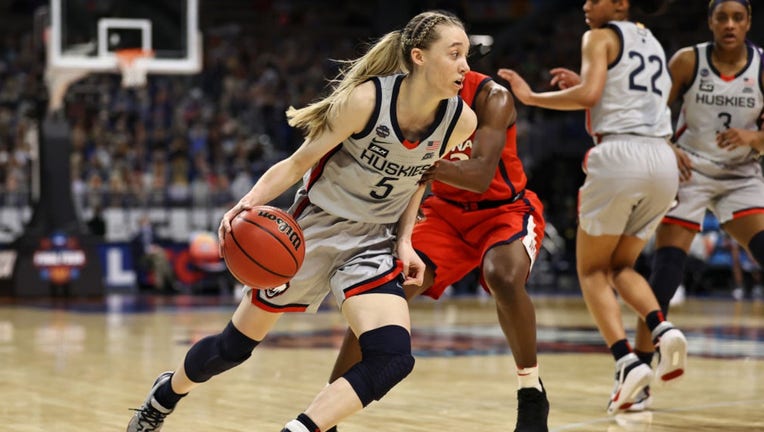 SAN ANTONIO, TEXAS - APRIL 02: Paige Bueckers #5 of the UConn Huskies drives toward the hoop against the Arizona Wildcats during the second quarter in the Final Four semifinal game of the 2021 NCAA Women's Basketball Tournament at the Alamodome on Ap ((Photo by Elsa/Getty Images))

(FOX 9) - UConn hoops star and Minnesotan Paige Bueckers is making moves off the court to potentially profit on her stardom.

According to the United States Patent and Trademark Office record, in July, Bueckers filed to trademark her nickname "Paige Buckets". If approved, she'd be able to use the moniker on athletic apparel, such as shirts and hats.

Under the NCAA's recent ruling to allow college athletes to profit off of their name and likeness, Bueckers is among those with the most to gain due to her popularity and large social media following.

In her freshman season at UConn, Bueckers took the Huskies to the Final Four and was named the Naismith College Player of the Year. She also won an ESPY Award for best women's sports college athlete.