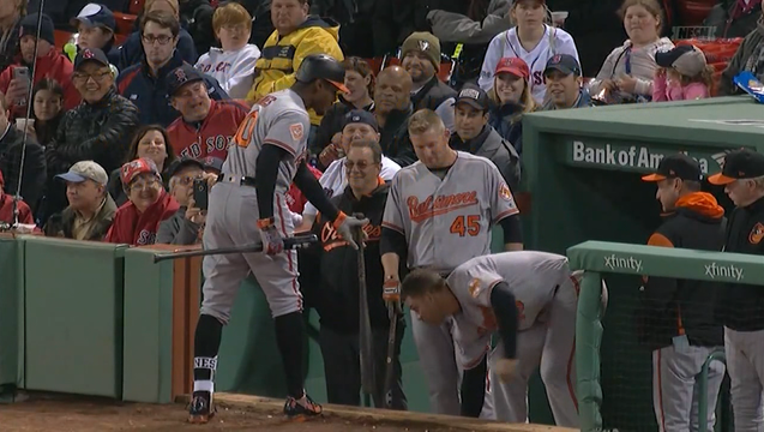 BOSTON (AP) - Orioles outfielder Adam Jones called the incident in which he said fans inside Fenway Park yelled racial slurs at him and threw a bag of peanuts in his direction was "unfortunate," with no place in today's game.

Jones said Tuesday he thinks the taunts speak to larger race issues in the United States, rather than the city of Boston or its Red Sox fan base.

"I thought we'd moved past this a long time ago," Jones said. "But obviously with what's going on in the real world, things like this, people are outraged and are speaking up at an alarming rate. It's unfortunate that I had to be involved with it."

The All-Star said it was not his intent to flood attention on what happened to him, but felt "it was just the right time" to speak out.

Kennedy said 34 people were ejected for various reasons Monday night and reiterated the team's "zero tolerance" policy for such incidents. He also said there would be extra security around the outfield on Tuesday night.

"I'm a grown man with a family to raise. So I'm not just gonna let nobody sit there and berate me," Jones said. "Where I come from if you say things like that, you put on the gloves and you go after it. Obviously in the real world you can't do that, especially in my field."

Kennedy said that 10-15 people are usually ejected from Fenway any given night, calling the 34 ejected Monday usually high. Along with the fan ejected for throwing the peanuts, a second fan was ejected for using foul language toward a player. But the team doesn't know whether the fan used the bad language toward Jones.

Kennedy and manager John Farrell separately met with Red Sox players on Tuesday and said the players said they'd experienced similar incidents in both Fenway and around the league.

"I think one person hears an inappropriate remark or slur, that's one person too many," Kennedy said.

Boston's professional teams - like the city's neighborhoods - had different reactions to the civil rights movement and the integration of professional sports.

While the Celtics and Bruins broke barriers in pro basketball and hockey, the Red Sox were the last Major League Baseball team to field a black player.

In the 1980s, the Red Sox also dealt with an incident during spring training in Florida in which an Elks Lodge was giving passes to only white players.

It also wasn't until last season that the New England Patriots started a black quarterback for the first time in its history. Rookie Jacoby Brissett started two games with Tom Brady suspended as part of his "Deflategate" punishment and backup Jimmy Garoppolo injured.

Outrage and condemnation of Monday's incident flowed from around major league baseball.

"It's nothing new to any of us," Atlanta Braves outfielder Matt Kemp said. "He let it be known that's what we go through. I mean, it's pretty much normal, especially in some of these different cities. I'm not going to name all the cities, but there's some pretty tough cities where people say some pretty ruthless things. There's no filters or nobody holding anybody accountable for some of the things these fans do."

Police Lt. Mike McCarthy said a fan threw a bag of peanuts at the Orioles' dugout and hit a police officer posted nearby, not the center fielder. He told The Associated Press that security officials had the man thrown out before police could identify him.

Jones, a five-time All-Star, said he has been the subject of racist heckling in Boston's ballpark before.

"Hopefully the awareness comes, he said. "People around in the stands will hold other fans accountable. The Red Sox and I'm sure other stadiums are gonna beef up security and try get the ushers to facilitate a little better when they see some patrons that are a little too drunk."

The Red Sox said any spectator behaving poorly forfeits the right to be in the ballpark and could be subject to further action.

"The racist words and actions directed at Adam Jones at Fenway Park last night are completely unacceptable and will not be tolerated at any of our ballparks," Baseball Commissioner Rob Manfred said in a statement.

The AL East rivals have played some testy games early this season, with hit batters, hard slides, injuries and a fine.

Hall of Famer and Yankees senior adviser Reggie Jackson said the incident with Jones proves the United States has long way to go with race relations.

"While there was a residue of racism in the game, certainly it wasn't out in the open when I played," he said. "I guess this thing with Adam Jones, it makes you well up and get teary-eyed. ... You really feel that way?"