SEOUL, South Korea - North Korea appears to have restarted the operation of its main nuclear reactor used to produce weapons fuels, the U.N. atomic agency said, as the North openly threatens to enlarge its nuclear arsenal amid long-dormant nuclear diplomacy with the United States.

The annual report by the International Atomic Energy Agency refers to a 5-megawatt reactor at the North’s main nuclear complex in Yongbyon, north of Pyongyang. The reactor produces plutonium, one of the two key ingredients used to build nuclear weapons along with highly enriched uranium.

"Since early July 2021, there have been indications, including the discharge of cooling water, consistent with the operation of the reactor," said the IAEA report dated Friday.

The report said there were indications of the operation of Yongbyon’s radiochemical laboratory from mid-February to early July this year. It said this period of operation is consistent with previous reprocessing campaigns announced by North Korea of irradiated fuel discharged from the reactor. The laboratory is a facility where plutonium is extracted by reprocessing spent fuel rods removed from reactors. 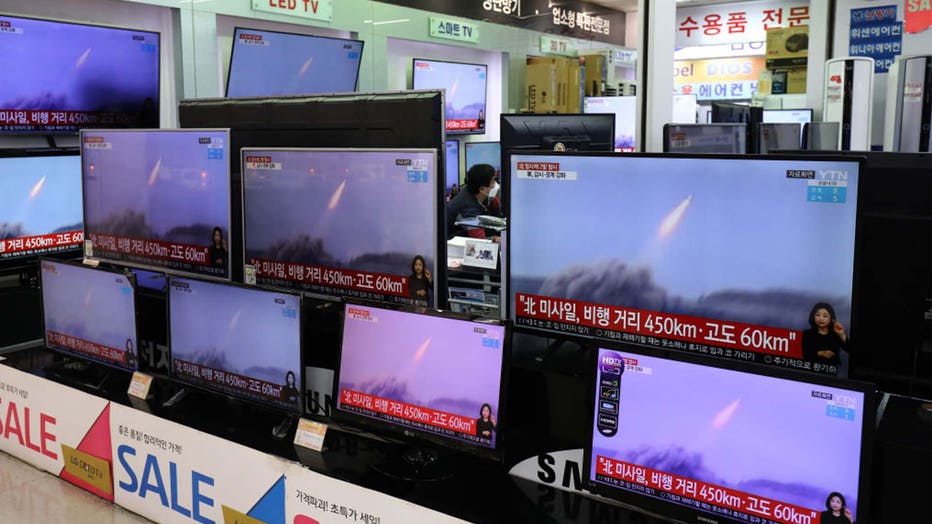 FILE - A man wearing a face mask sits near TV screens showing a news program reporting about North Korea's missiles with file images at an electronic shop on March 25, 2021 in Seoul, South Korea.

"(North Korea's) nuclear activities continue to be a cause for serious concern. Furthermore, the new indications of the operation of the 5-megawatt reactor and the radiochemical laboratory are deeply troubling," the IAEA said.

The IAEA has not had access to Yongbyon or other locations in North Korea since the country kicked out IAEA inspectors in 2009. The agency said it uses satellite imagery and open source information to monitor developments in North Korea’s nuclear program.

The Yongbyon complex also produces highly enriched uranium, the other key nuclear fuel. The IAEA report said "there were indications, for a period of time, that the reported centrifuge enrichment facility was not in operation" though regular vehicular movements were observed.

The complex, which North Korea calls "the heart" of its nuclear program and research, has been at the center of international concerns for decades. It’s not clear exactly how much weapons-grade plutonium or highly enriched uranium has been produced at Yongbyon and where North Korea stores it.

In early 2019, North Korean leader Kim Jong Un offered to dismantle the entire complex if he won extensive sanctions relief during a summit with then-President Donald Trump. But the Americans rejected Kim’s offer because it would only be a partial surrender of his nuclear capability.

North Korea is believed to be running multiple other covet uranium enrichment facilities. According to a South Korean estimate in 2018, North Korea might already have manufactured 20-60 nuclear weapons as well.

In recent months, North Korea has warned it would expand its nuclear program if the United States doesn’t withdraw its "hostile" policy on the North, in an apparent reference to U.S.-led sanctions and regular U.S.-South Korean military drills. Earlier this month, Kim’s powerful sister, Kim Yo Jong, said North Korea would bolster "absolute deterrence" to cope with intensifying U.S. threats.

Lee Jong-joo, spokesperson of South Korea’s Unification Ministry, said Monday that South Korea was closely monitoring North Korea’s nuclear and missile activities along with the United States. But she declined to comment on whether Seoul was seeing signs that the North was reactivating its nuclear facilities.

White House press secretary Jen Psaki said Monday that the Biden administration was aware of the report and closely coordinating with allies and partners.

"This report underscores the urgent need for dialogue and diplomacy so we can achieve the complete denuclearization of the Korean Peninsula," she said. "We continue to seek dialogue with (North Korea) so we can address this reported activity and the full range of issues related to denuclearization."