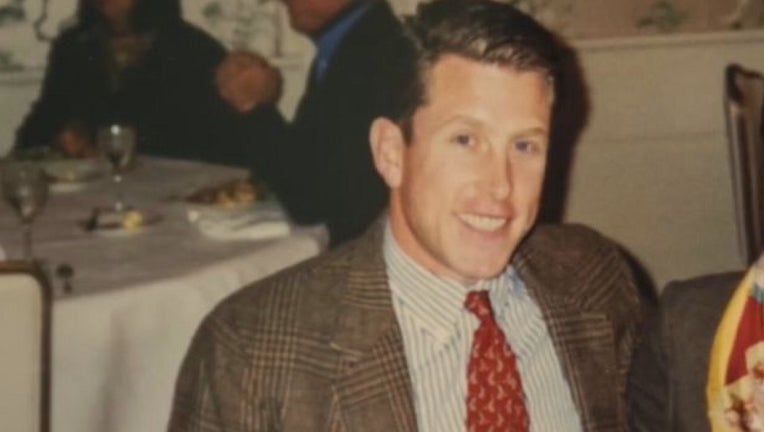 Gordon Aamoth lost his life during the September 11th attacks at the World Trade Center. (Supplied)

WAYZATA, Minn. (FOX 9) - A new memorial in Wayzata, Minnesota honors the life of Gordy Aamoth, one of the thousands of people who died in the September 11th attacks.

"The memorial has been in the works for at least a decade. It was finished just in time for the 20th anniversary of 9/11."

A new memorial in Wayzata, Minnesota honors the life of Gordy Aamoth, one of the thousands of people who died in the September 11th attacks.

On the shores of Lake Minnetonka in downtown Wayzata, there's a new memorial to a native son who lost his life at the World Trade Center on September 11, 2001.

"I grew up playing hockey with Gordie," explained Andrew Mullin. "He was a heck of an athlete. He had charisma, level 10. He was a great guy. Big, loud. You knew he was in the room when he was around."

Gordie Aamonth was working as an investment banker on the 104th floor of the south tower when a hijacked plane hit the building, causing it to collapse on September 11th, 2001.

Before he moved to New York, Gordie was a familiar face around Wayzata and had been the captain of the football team at the Blake School.

The 9/11 Memorial Grove consists of two granite benches that symbolize the Twin Towers, surrounded by nine trees to represent 9/11.

The memorial also has several pieces of steel and glass from the World Trade Center that were donated by Aamoth's family to the city of Wayzata.

As well as flags that were flown in Gordy's honor over Ground Zero and the U.S. capitol.

"The theme of this project is unity so it's not so much about the attack but how we all came together and how we responded," said Mullin.

The memorial is intended to be a place where community members can reflect and remember everyone who died in the terrorist attacks and honor a young man Wayzata will never forget.

The Wayzata Conservancy raised $150,000 to pay for the memorial. It will have its official dedication ceremony on Saturday morning.