No, it’s not the Great Pumpkin, Charlie Brown, but it is a giant pumpkin.

Graham lugged a whopping 2,480-pound pumpkin to Topsfield, knocking out the previous record holder by nearly 200 pounds, according to a fair spokesperson. 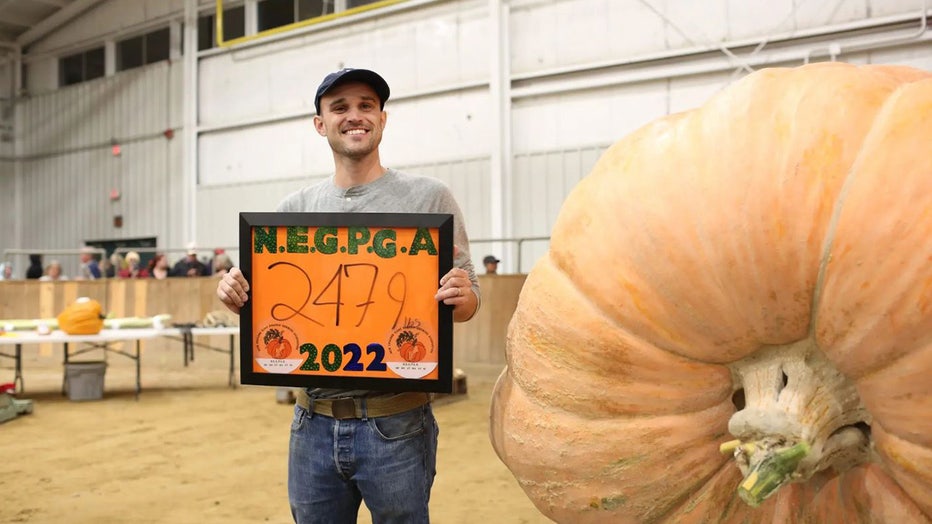 Jamie Graham stands next to his record-setting pumpkin. (Topsfield Fair)

The previous record holder was a 2,294-pound pumpkin, grown by Alex Noel of Abington, Connecticut.

Noel must have an affinity for growing giant pumpkins because he came in second place this year with a huge 2,234-pound pumpkin.

Third place was given to Woody Lancaster of Topsfield, Massachusetts, who brought a 1,850-pound pumpkin, according to a fair spokesperson.

The hobby of growing giant pumpkins began in 1893 when a mere 365-pound pumpkin was grown by William Warnock of Ontario, Canada, according to the New York Botanical Garden’s (NYBG) website.

The giant gourd was displayed at the Chicago World’s Fair and for the next 70 years, the maximum weight remained in the high 300s and up to 400 pounds until the 70s and 80s, that’s when records began to truly get smashed.

Then, in 1996, the first-ever 1,000-pound pumpkin was grown, setting the standard for giant pumpkin growers everywhere.

And in 1979, Howard Dill of Nova Scotia created the first Atlantic Giant pumpkin seed which is now used to breed all giant pumpkins today, according to the NYBG.

While Graham’s pumpkin is a feat to behold, the pumpkin that holds the world record for largest squash as of November 2021, is owned by Italian farmer Stefano Cutrupi of Chianti, Tuscany, according to Guinness.

Cutrupi’s pumpkin weighs just a little over 2,702 pounds. That’s more than "a Nissan Micra car, or about the same as 17.5 adult men," Guinness said.