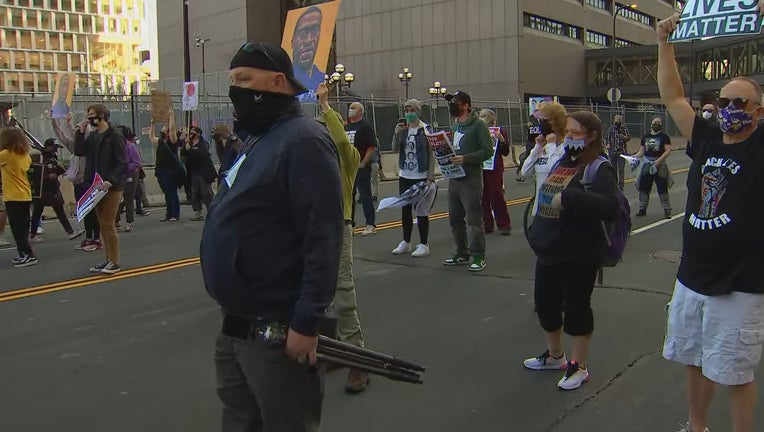 Demonstrators rally outside day one of the Derek Chauvin trial.

MINNEAPOLIS (FOX 9) - While opening statements and the first day of the Derek Chauvin trial commenced inside Hennepin County Government Center Monday afternoon, demonstrators gathered outside to get people’s attention in a peaceful way.

At the northwest corner of the building, protesters partially blocked Third Avenue South Monday. Demonstrators either diverted traffic or asked for honks from passing drivers. They sought peaceful methods of protest that were disruptive enough to get people’s attention.

Demonstrators rally during day one of the Derek Chauvin trial

While opening statements went on inside the courtroom, on the streets, demonstrators made their voices heard Monday.

For the duration of the trial, various community groups are working as "navigators" to help make sure things remain peaceful.

"We want to be that bridge between law enforcement and protesters," said Kim Griffin, of a Mother’s Love. "We just want to make sure, you know, each side can do the job and they’re here to do."

A coalition of Minnesota community groups held a demonstration in downtown Minneapolis following the first day of witness testimony in the Derek Chauvin trial.

Griffin said they plan to be there every day and, already, when protesters seemed too disruptive, they stepped in to simmer things down.

"A situation this morning where we had to kind of intervene and be a mediator and we were successful," Griffin said. "It was, you know, very, very proactive."

While peace is the goal, demonstrators hope their purpose is not forgotten.

While it is unclear how long the Derek Chauvin trial will go, protesters say Monday will not be the last time they gather outside the Hennepin County Government Center.

Demonstrators like Anne Keirstead, her partner and her daughter are hoping for justice in the case that is being watched so closely by so many Minneapolitans.

"We just want a just verdict," she said. "And we are worried that is not going to happen. So, we want to get out here to say that Black Lives Matter and we believe that there is an injustice."