Women's rights attorney Gloria Allred speaks to LiveNOW after the U.S. Supreme Court voted to overturn Roe v. Wade, the 1973 decision that had provided a constitutional right to abortion.

Banning abortion nationwide would potentially raise U.S. maternal death rate by as much as 24%, a new analysis by researchers at the University of Colorado suggests.

The study, published June 29 in the pre-print server SocArXiv, came days after the U.S. Supreme Court’s ruling to overturn Roe v. Wade and end the constitutional right to an abortion. The ruling prompted a variety of reactions at the state level.

Some states have maintained the right to abortion and are now working to expand access to the procedure, while abortion is now restricted in several others, including in some states where it’s almost entirely illegal with no exceptions for pregnancies caused by rape or incest. And while the end of federal abortion protections opens the door to potentially making it illegal nationwide, it’s unclear how plausible that outcome would be. 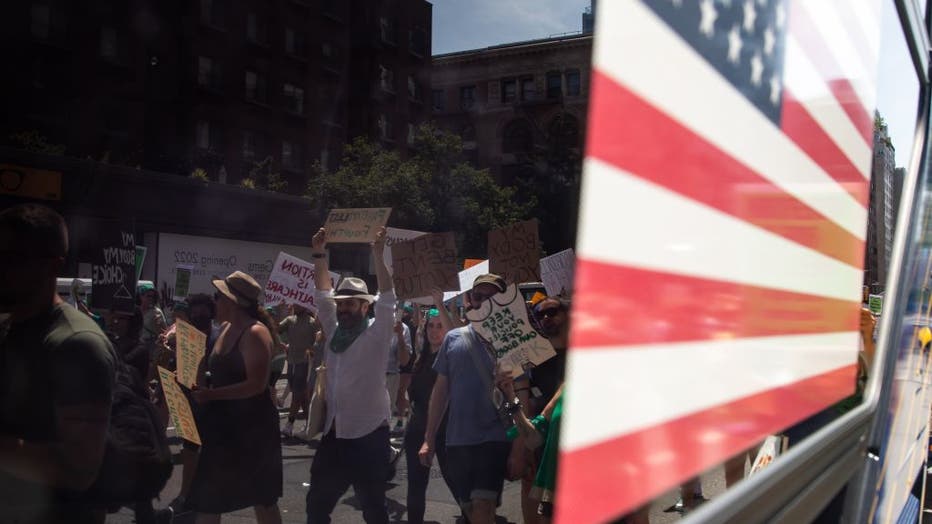 FILE - Demonstrators march during a protest against the Supreme Court's overturning of the Roe v. Wade abortion-rights ruling in New York, the United States, July 4, 2022. (Photo by Michael Nagle/Xinhua via Getty Images)

The new study analyzes how a nationwide ban on abortion would impact maternal death rates. It uses newly available data from 2020 to show that the "increased exposure to the risks of pregnancy" caused by such a ban "would cause an increase of 210 maternal deaths per year (24% increase), from 861 to 1071."

It adds that the increase would be greatest among non-Hispanic Black people by an estimated 39%.

The researchers noted how data shows staying pregnant carries a higher risk of death than having an abortion. The U.S. Centers for Disease Control reported 0.41 deaths per 100,000 legal abortions between 2013 and 2018 and that the maternal mortality rate was 23.8 deaths per 100,000 live births in 2020.

For Black people, the numbers were even more alarming.

"There is a robust network of Black-led research demonstrating how we can better support Black pregnant people who are at 2-3 times greater risk of dying because they’re pregnant compared to other groups," Amanda Stevenson, an assistant professor of sociology at CU Boulder and lead author of the paper, said in a statement.

The new findings of the study have not yet been peer-reviewed.

BREAKING NEWS: The Supreme Court of the United State on Friday overruled Roe v. Wade. Sen. McConnell and other lawmakers are reacting to the ruling. Subscribe to LiveNOW from FOX! https://www.youtube.com/livenowfox?sub_confirmation=1 Where to watch LiveNOW from FOX: https://www.livenowfox.com/ Follow us @LiveNOWFOX on Twitter: https://twitter.com/livenowfox Raw and unfiltered. Watch a non-stop stream of breaking news, live events and stories across the nation. Limited commentary. No opinion. Experience LiveNOW from FOX.

The team also looked specifically at 26 states that have already banned or plan to ban abortion following the overturning of Roe v. Wade and found a lot of variation. In states with already high maternal death rates and moderate to high abortion rates, such as Florida and Georgia, the researchers estimated a 29% increase in maternal deaths.

In contrast, states like Nebraska, Missouri and West Virginia, which have already made it difficult to get an abortion, "are expected to see little to no change," according to a press release shared about the findings.

US has highest maternal mortality rate among developed countries

The U.S. has the highest maternal mortality rate among developed countries, according to data shared by the Commonwealth Fund, a nonprofit dedicated to improving health care and health policy.

In 2018, there were 17 maternal deaths for every 100,000 live births in the U.S. — a ratio more than double that of most other high-income countries, the nonprofit said. In the Netherlands, Norway, and New Zealand, the maternal mortality ratio was three per 100,000 or fewer.

"Our estimates highlight how we can prevent the post-Dobbs bans on abortion from increasing the already tragically high numbers of deaths due to pregnancy in the U.S.," Stevenson said, referring to the Supreme Court’s Dobbs v. Jackson Women’s Health Organization decision that overturned Roe.