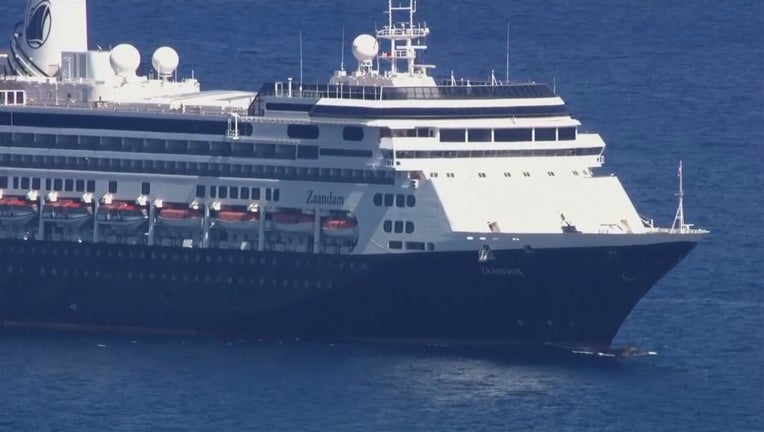 After being quarantined to their cabin for a week and half, Kathy Carton and her husband are happy to finally be heading home.

Two U.S. cruise ships have finally docked in Florida after carrying hundreds of sick passengers and crew members for days.

"My husband and I are feeling very relieved and happy that we're actually on land or we can see land," said Carton.

After nearly a month at sea that was supposed to be a dream vacation, Kathy Carton and her husband Andy are grateful their nightmare is coming to an end.

"When we came into port we could see the people in the condos and people outside their homes welcoming us so that was really heartwarming for us," she explained.

Carton and her husband along with her daughter and her daughter's fiance boarded the Holland America cruise ship Zaandam in Buenos Aires back on March 7.

But as the coronovirus pandemic spread globally, the ship was turned away from its original destination in Chile and left foundering off the coast of South America.

"It was really frustrating," said Carton. "We were denied by 11 countries to dock and the whole going up the Pacific coast along South America, it just seemed to take forever."

After four people on the ship died, two from coronavirus, and 138 others got sick with flu-like symptoms, Carton and her husband were among the healthy passengers transferred to another ship: the Rotterdam.

Both ships docked in Fort Lauderdale Thursday afternoonwhere Carton says passengers were given masks. They will be put on shuttle buses and taken directly to the tarmac at the airport for charter flights home on Friday or Saturday, where they'll face another 14 days of self-quarantine.

"Luckily we have a bigger home than we've been in these last couple of weeks," she said. "So we'll have more space to roam around in."

Carton says the ordeal has brought her family closer together but surviving the experience is something they will never forget.

"When you go through a crisis or a horrible situation it really does bring out the best in people I believe and that's what I saw through this," she said.

In all, about 1,200 people will be getting off the ships in the next couple of days. The sick will remain on the Zaandam where they will be treated.