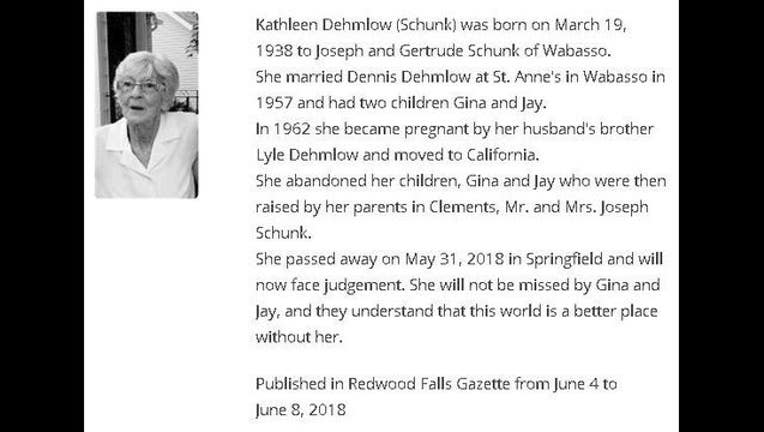 Kathleen Dehmlow's obituary was published by the Redwood Falls Gazette on June 4th, 2018.

REDWOOD FALLS, Minn. (KMSP) - A family in Redwood Falls, Minnesota, has apparently been waiting decades to finally speak their peace about their mom.

An obituary for 80-year-old Kathleen Dehmlow ran in the Redwood Falls Gazette on Monday. The obituary starts well enough, stating her date of birth, parents, marriage and children.

Then, it takes a turn.

“In 1962, [Kathleen] became pregnant by her husband’s brother, Lyle Dehmlow, and moved to California,” the obituary read. “She abandoned her children, Gina and Jay, who were then raised by her parents in Clements, Mr. and Mrs. Joseph Schunk.”

Kathleen’s family does not appear to have forgiven her, because the obituary ends with this: “She passed away on May 31, 2018 in Springfield and will now face judgment. She will not be missed by Gina and Jay and they understand that this world is a better place without her.”

Update: The Redwood Falls Gazette has since pulled the paid obituary from their website.