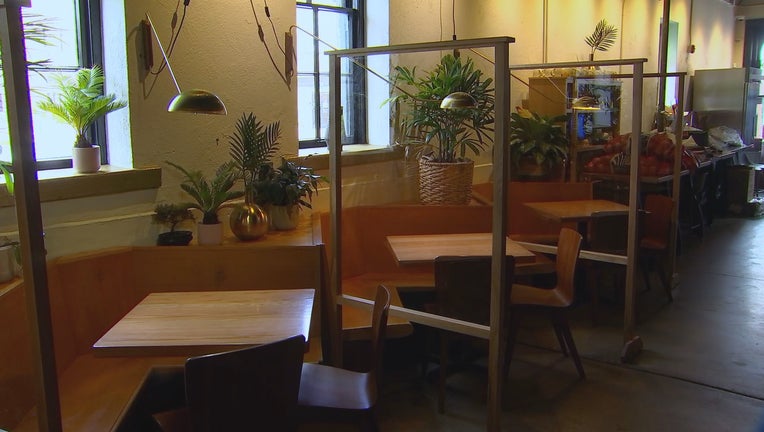 Hope Breakfast Bar in St. Paul is putting up partitions between tables as a safety precaution for COVID-19. (FOX 9)

Restaurants across Minnesota are preparing to open June 1, the date the governor set as a goal for reopening, but getting ready for this new way of life is challenging as eateries wait on direction from the state.

“Safe distancing, spreading out our tables, putting up plexi-glass, retraining all our staff,” said Brian Ingram, the owner of Hope Breakfast Bar in St. Paul.

There is a lot to get done before restaurants re-open June 1. At Hope Breakfast Bar that includes installing partitions between every table.

“Nobody’s told us we had to do partitions,” said Ingram. “We just did it because we figured something was coming and we looked at other parts of the country, even other countries what they’re doing, so we’ve been planning ahead trying to get ready.”

Minnesota restaurants won’t get official guidelines for a phased re-opening until the middle of next week and until then - it’s a guessing game.

“There’s a lot of rumors,” said Tim Mahoney, the owner of The Loon Café in downtown Minneapolis. “One of the ones we keep hearing over and over again is the 50% occupancy.”

While getting caught up on his debts depends on re-opening, Mahoney says at limited capacity, his troubles will likely continue.

Several restaurants have gone out of business waiting for the stay-at-home order to be lifted, including the Bachelor Farmer in Minneapolis’ North Loop neighborhood.

Mahoney says most restaurants will still need financial assistance, if they have any chance of making it.

“If we don’t have help from the government, from our landlords, from our purveyors, we’re going to have very difficult times,” said Mahoney.

The governor has directed a taskforce made up of several state agencies, with input from industry groups, to release guidelines for a phased re-opening by May 20.