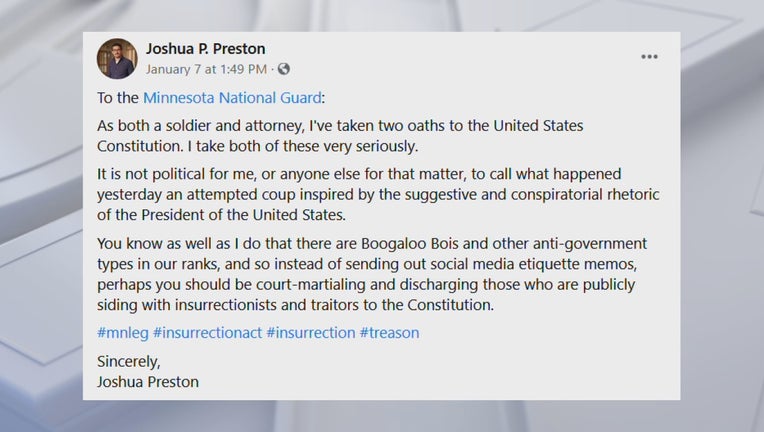 (FOX 9) - A Minnesota National Guard soldier says he thinks the Guard needs to speak out more against violence. Spc. Joshua Preston penned a Facebook post last week that got a lot attention for calling out what he thinks is a lackluster response after the deadly riot in Washington D.C.

"It shouldn’t be political for us to acknowledge that what transpired on the U.S. Capitol on Jan. 6 was an insurrection," said Preston.

A Minnesota National Guard soldier says he thinks the Guard needs to speak out more against violence. Spc. Joshua Preston penned a Facebook post last week that got a lot attention for calling out what he thinks is a lackluster response after the deadly riot in Washington D.C.

"It was a three-sentence comment saying, 'In light of the timely events occurring on the national stage, reminder soldiers about the Minnesota National Guard’s social media policy and they must remain apolitical,'" said Preston.

That message prompted Preston to post on Facebook, sharing his views on the matter. Preston’s post led to a call from his commander and while he wasn’t told to take it down, it inspired Preston to write a 12-page memo to Guard leadership.

"I laid out some proposals of what we could do to engage honestly and openly," he said.

The soldier and lawyer argues there are times when not speaking out actually goes against their oaths.

"It puts us in the position of remaining silent when in fact what we need is just courage the ability to call it what it is and to be up front and to say what happened on Jan. 6 was wrong," said Preston.

He also believes silence can be a dangerous breeding ground for right-wing extremism within military ranks. Preston told FOX 9 while he’s never met anyone in the Minnesota National Guard who is involved with these groups, he’s concerned about the issue overall.

"There’s a broader culture in the military and it’s documented in literature as well, saying that extremist groups do prey upon soldiers because of the attitudes that many soldiers have as a product of their service," said Preston.

"The Minnesota National Guard social media policy does not prevent its members from sharing political or partisan opinions on social media. It has a stated goal of providing a framework for members to participate in social media in a respectful, relevant way that protects organizational rapport with the American public and follows the letter and spirit of established regulation. The social media presence of National Guard members should be aligned with Department of Defense Directive 1344.10.

"Our goal is to protect the First Amendment rights of our members while also ensuring the Minnesota National Guard is not perceived to endorse a political opinion, cause or candidate. As such, our policy encourages members to use a disclaimer to separate their personal views from those of the organization.

"Ultimately, National Guard members should only post messages on social media that are consistent with Army and Air Force Values and demonstrate dignity and respect for self and others."