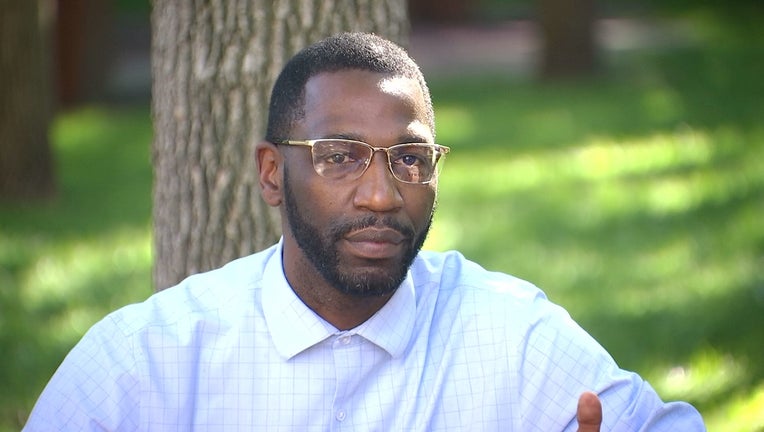 Michael Porter recalled the nightmare that was Hurricane Katrina on Sunday as Ida made landfall earlier in the day. (FOX 9)

(FOX 9) - As Michael Porter watches Hurricane Ida video on the anniversary of Hurricane Katrina making landfall, it brings up some of his worst memories.

"I dream about this day still," he tells FOX 9. "Seeing this video brings all these emotions back out."

As Michael Porter watches Hurricane Ida video on the anniversary of Hurricane Katrina making landfall, it brings up some of his worst memories.

Porter is from Jackson, Mississippi, which is roughly three hours north of New Orleans where Hurricane Katrina hit the hardest in 2005.

The storm caused more than 1,800 deaths and an estimated $125 billion in damage, according to data from the National Oceanic and Atmospheric Administration.  Even though New Orleans is 200 miles away from Porter’s hometown, he recalls feeling the impact from the storm when he says his family went in survival mode for what he says felt like an eternity.

"We had no clue what we were up against - not just from the water but from the winds," says Porter. "We didn’t have electricity, so we couldn’t charge our phone, we couldn’t eat. We had to barbecue and burn wood for fire […] we had to boil water to drink."

The federal government has invested $14.5 billion on infrastructure in New Orleans on levees and drainage to better protect residents from flooding and storm surge.

While Porter has family on the way from Mississippi to Minnesota due to mandatory evacuation orders by state leaders, he says his biggest concerns are for those who remain, particularly vulnerable populations such as children and senior citizens.

"When Hurricane Katrina hit back then, you got a lot of elderly people that don’t want to go anywhere. You have people in Louisiana and Mississippi who are born and raised there. They have been through so much and have so many years there and don’t want to leave."