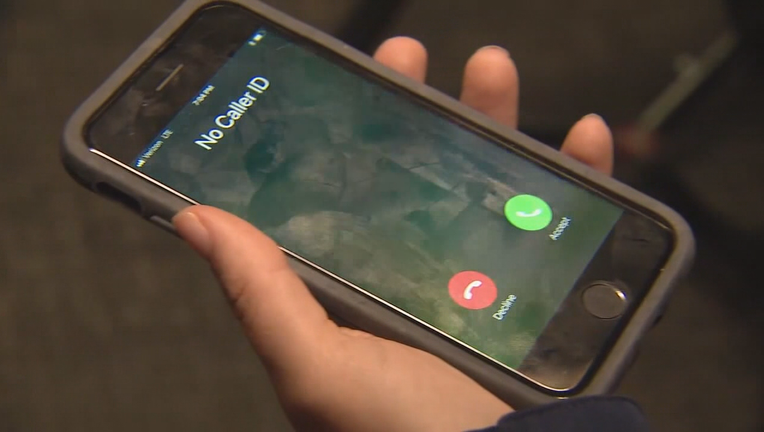 A robocall on a smartphone.

ST. PAUL, Minn. (FOX 9) - A Minnesota lawmaker says the state should create the toughest anti-robocall law in the country, including new regulations on phone companies.

State Rep. Zack Stephenson, DFL-Coon Rapids, said Monday that he’ll propose legislation in 2020 to crack down on so-called “spoofing,” which happens when an overseas scammer uses a local area code to trick people into picking up the phone.

Minnesota lawmakers are working to crackdown on robocalls statewide.

The state should force phone companies to block incoming robocalls for free, and consumers ought to be able to sue those companies that don’t comply, Stephenson said.

“I had a town hall just last week and I asked about robocalls. Every single hand in the room went up, about how frustrated people are,” the first-term lawmaker told reporters. “There’s just been an explosion.”

The legislation, which House Democrats said was not yet finalized, has the support of Majority Leader Ryan Winkler and state Rep. Laurie Halverson, who chairs the House commerce committee.

Democratic Gov. Tim Walz and Senate Republicans said separately that they were generally open to considering the issue in 2020.

“Senate Republicans support protecting consumers from bad actors and we’ll certainly take a look at the bill when it’s introduced in February,” said Rachel Aplikowski, a spokeswoman for Senate Republicans.

Walz said consumers should have to opt-in before getting robocalls.

“I think Minnesota used to – and I still believe has – fairly robust protections for consumers, I’d certainly welcome that conversation,” the governor told FOX 9.

Stephenson said his legislation would ban robocalls in Minnesota. Those who use the spam calls to commit identity theft or theft by swindle would face increased penalties.

Some phone companies have already rolled out new technology in response to consumer complaints about robocalls.

AT&T, for example, now warns its customers when an incoming call could be spam. But the company charges $4 per month for an add-on service that sends the calls straight to voicemail.

“You shouldn’t have to pay those $4 for the privilege of not being targeted by fraudsters,” Stephenson said.

Democrats said FCC regulations have been ineffective and urged Congress to crack down on robocalls nationwide. But congressional gridlock will likely prevent that from happening, they acknowledged.

“I think in an ideal world, it would happen at the federal level, but the federal government can’t seem to do anything these days,” Stephenson said.