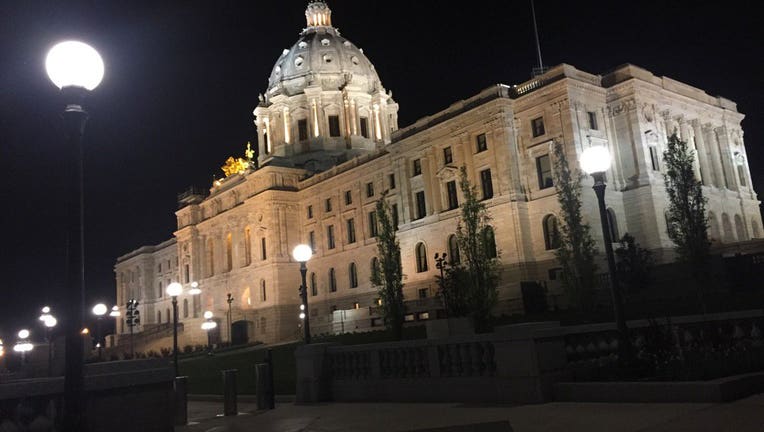 ST. PAUL, Minn. (FOX 9) - The Minnesota Legislature's usual last-minute fireworks turned into a dud Sunday as lawmakers failed to approve construction projects or respond to the economic fallout caused by the coronavirus pandemic.

A $998 million infrastructure bonding bill failed in the state Senate over opposition from Democrats. The Sunday evening vote was 38-29, and 41 votes are required to pass a borrowing bill. One day earlier, a larger bonding bill failed in a similar way in the House after being blocked by minority Republicans.

With the sun setting outside on the final night of the 2020 legislative session, prospects dimmed for a deal approving Minnesota construction projects and responding to the economic fallout caused by the coronavirus pandemic.

“This is the last train leaving the station for bonding," Senate Majority Leader Paul Gazelka, R-East Gull Lake, said in a statement after the failed Senate vote. "It’s disappointing that we couldn’t come together tonight on this responsible, important bill."

When the pandemic first hit Minnesota, it united lawmakers who quickly passed three measures totaling $551 so the state could respond to the public health emergency. But in recent weeks, the goodwill has been replaced by partisan bickering over the state's actions.

Gazelka said earlier in the day that without a bonding bill, there'd be no tax bill or additional spending. By night's end, lawmakers were expecting a June 12 special session.

The four legislative leaders were negotiating behind closed in the mid-afternoon, and Gazelka said he and House Speaker Melissa Hortman, DFL-Brooklyn Park, had agreed on the size of the bonding package. But talks with the minority caucuses broke down.

Borrowing bills have a different dynamic under Minnesota law requiring a supermajority vote, meaning support from all four legislative caucuses is needed. House Republicans have vowed to hold up any bonding bill as long as Minnesota remains under a peacetime emergency declared by Gov. Tim Walz to fight the coronavirus.

Meanwhile, Democrats from the Metro said the Senate's bonding package included little for their districts.

"We just talked about basically getting nothing in the biggest city the state has – in communities that need it more than anybody," lamented state Sen. Jeff Hayden, DFL-Minneapolis.

"Communities across the state are counting on the legislature to pass a robust Local Jobs and Projects Plan. Work together and get this done for Minnesotans," Walz said.

Without a deal Sunday night, not only will the workers not get a raise, they'll see their 2019 pay increases wiped out.

Similar, the House and Senate have been at odds over how best to respond to the economic fallout caused by the virus. The Senate has passed $1 billion in tax breaks, including a delay for businesses filing their property taxes. The House favors $100 million in relief for struggling renters and mortgage owners, and has also approved $500 cash payments to 27,000 families on welfare.