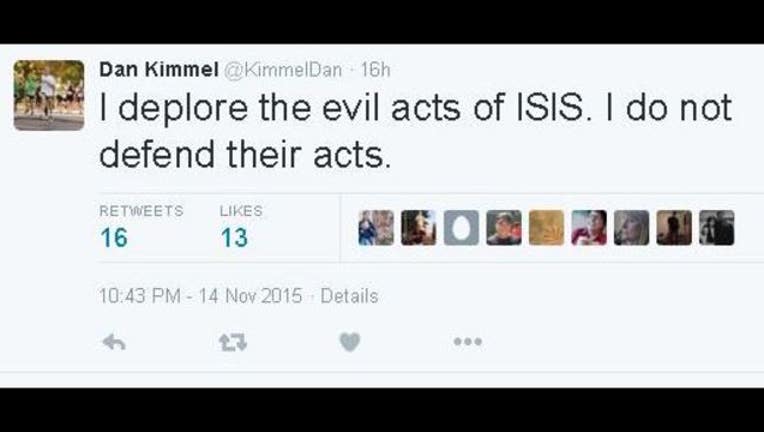 Dan Kimmel announced in a letter he’d be withdrawing from the race on Sunday, and clarified he believes the attacks in Paris and other ISIS terrorist actions are “cowardly and despicable.”

"ISIS isn't necessarily evil. It is made up of people doing what they think is best for their community. Violence is not the answer, though."

At the end of his letter, Kimmel wrote “The tweet was stupid. I’m sorry.”

My tweet last evening was in response to a statement made during the candidate debates, not in response to the activities in Paris. It was poorly worded and did not convey my intent.

I do think the attacks in Paris yesterday, along with other ISIS terrorist actions, are cowardly and despicable. My heart breaks for the people of France, of Paris, the families of those wounded or killed and the casualties themselves. My thoughts are with them. I condemn the attacks, as I condemn all violence.

I am folding up my campaign tent. The campaign website and Facebook page will be down by this afternoon.
I apologize to the volunteers and contributors who have put so much time, effort and money into my campaign.

I am very sorry for “spreading ick” on other candidates and the DFL party. I will do everything I can to help resolve the issue: most likely the best thing for me to do is shut up. The tweet was stupid. I’m sorry.