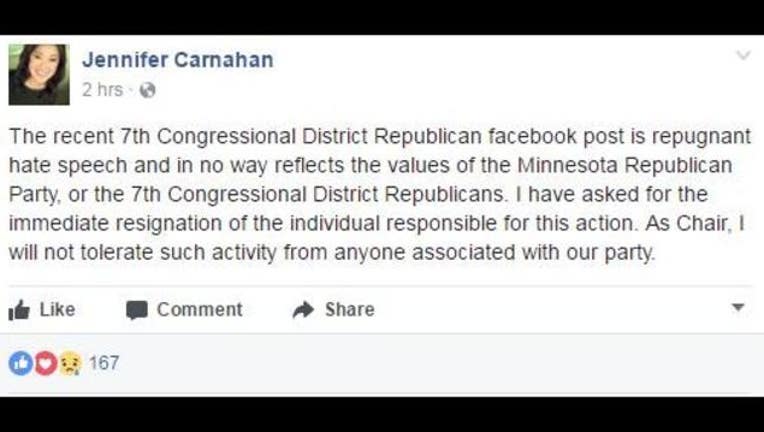 Jennifer Carnahan, the newly elected Republican Party Chair of Minnesota, decried the message in another Facebook post soon after, saying the post is "repugnant hate speech and in no way reflects the values of the Minnesota Republican Party, or the 7th Congressional District Republicans."

She continues on to say she has asked for the resignation of the individual responsible for the post and will not tolerate such action in the future.

Does that mean Muslim Refugees coming to Western Minnesota?

David Horowitz says we are in a War. That Minnesota's Keith Ellison is a raving, Louis Farrakhan supporting, anti-Semite, anti-white, racist and fascist American. And our current Rep. Collin Peterson take this lunatic Turkey Hunting...

Carnahan also sent an apology to the Minnesota chapter of the Council on American-Islamic Relations, who welcomed her swift response in a statement Tuesday.

"This post is an example of the Islamophobia that pervades our political discourse and of how responsible leaders can reject anti-Muslim bigotry and help make it unacceptable," the statement said. "More Republicans in Minnesota and nationwide must go beyond apologies to address the growing Islamophobia in party ranks that inevitably results in such unfortunate incidents."