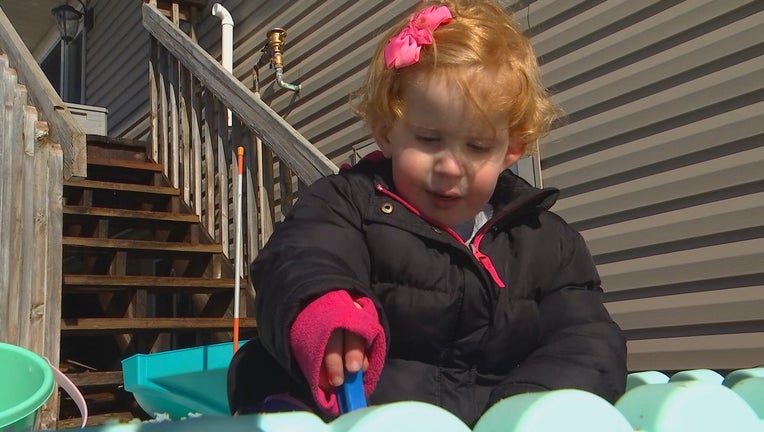 Shayla Senesac, 3, received a life-saving heart transplant when she was a baby. (FOX 9)

Her family celebrates twice each year - once for the day Shayla Senesac was born and again three months later on the day of her heart transplant.

A little girl in Champlin, Minnesota is celebrating her third birthday again this week.&nbsp;

Chatty and curious, Shayla is thriving. As of Thursday, doctors have cleared her as healthy enough for the first time in her life to leave mom and dad and explore daycare, preschool and beyond.

"Her immune system is strong enough now a simple cold is not going to, might not land us in the hospital right away," said Chad Senesac, Shayla's father.

FOX 9 first met Shayla when she was two months old and not allowed to leave the University of Minnesota Masonic Children's Hospital until doctors found her a match for a heart transplant. After 92 days of waiting, an infant-sized heart arrived from a donor to Shayla just within the narrow four-hour maximum time.

Now three years later, Shayla remains on only a couple medications and within the past six months she also weaned off a feeding tube.

Shayla and her parents have never met the family who opted to donate their child’s organs, but every day around this time Kelly writes a letter to them.

"My heart gets really emotional because like without them, yes Shayla wouldn’t be here and we know that. There are no words to express our deep gratitude for these incredible individuals who said yes," said Kelley Senesac, Shayla's mother.

The Senesacs are huge advocates for adult and pediatric organ donation. According to Life Source currently, more than 2,500 people in Minnesota are waiting for organ transplants and 73 of them are children under 18 years old.

Early on, Shayla’s parents didn’t know if she would ultimately end up being the organ donor or the recipient, but they hope parents willing to have those difficult conversations know they may be forever changing the course of a family's life.

"Whoever they are, we just love you so much and we honor the fact they get to choose if they want a connection, but man our kid is here because of them," said Kelly.