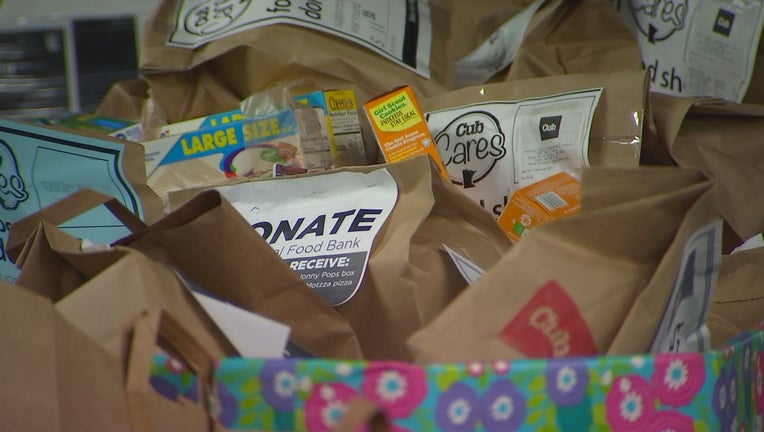 As the Salvation Army closes in on 2 million pounds of food donated, they say they are still seeing extremely high demand for help.

(FOX 9) - The strain of the pandemic on food pantries and kitchens is still being felt, even as a return to normal appears to be in reach.

Twin Cities Salvation Army says tens of thousands of people are now showing up at food shelves each month, and for 4 out of 10, it’s their first time.

The strain of the pandemic on food pantries and kitchens is still being felt, even as a return to normal appears to be in reach.

In the last month the organization set out with a goal of collecting 2 million pounds of food for food-insecure Minnesotans; and on Saturday, that goal likely became reality.

At the start of the day Salvation Army volunteers had already secured 1.7 million pounds of food for their 2 million pound goal.

"Those that have it need to share it," Barbara Fleming said. "People have been very generous."

"We brought over 3,000 pounds of food, from wonderful people at Woodbury Lutheran [Church}, we have four carloads packed," Cheryl Christiansen said.

"We have everything from rice to all kinds of canned goods," Barbara Fleming said.

The Salvation Army says one out of seven people in the Twin Cities is now experiencing food insecurity.

"We see people who are less fortunate and are struggling," Han Sor You told FOX 9. "I think it’s our duty to help them however we can."

Still, the increased hunger has been driven, in part, by the pandemic.

"It’s been quite a year for our country, the world," Barbara Fleming added.

Because of the pandemic, service projects were cancelled at Edina Middle School, but then a student came forward with another way to give back.

"Seeing all these cars was really cool, I had no idea there would be this many people. I felt really great that all my students participated and it was important to them," Edina Middle School teacher Ingrid Konieczny said. "It’s really cool to see the students lead it and not the teachers telling them what to do."

Connie Harts collected her donations in an unusual way too.

"We delivered sheets asking neighbors to donate and we had two large baskets that they put food and paper goods in," Harts explained.