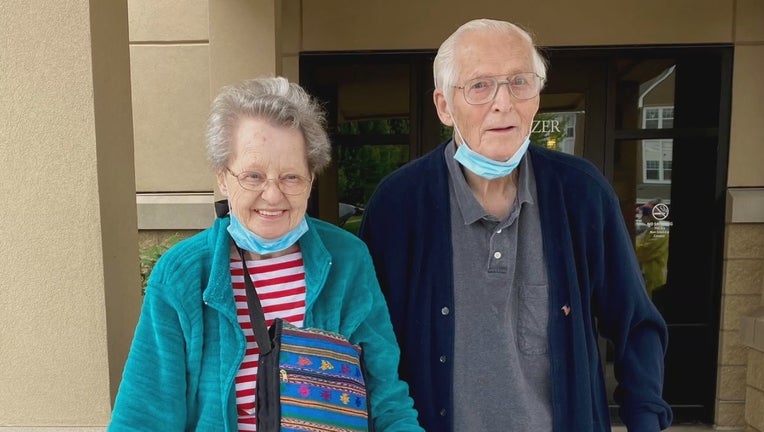 (FOX 9) - A Minnesota couple is celebrating after catching and recovering from COVID-19. Both are in their 90s but beat the odds against a disease that is especially devastating for elderly patients.

People over 80 make up more than 60 percent of Minnesota's COVID-19 deaths.

Minnesota couple in their 90s celebrates after beating COVID-19

A Minnesota couple is celebrating after catching and recovering from COVID-19. Both are in their 90s but beat the odds against a disease that is especially devastating for elderly patients.

John and Adele Davis were married in 1952. Over the years, they’ve barely been apart but what work, life, and family couldn't separate, COVID-19 did.

"I’m really confused about the whole thing," said John Davis. "All I remember is I was on oxygen most of the time."

The virus struck John back in April. He was so sick, doctors admitted him to Bethesda Hospital in St. Paul. it was M Health Fairview’s facility especially dedicated for COVID patients.

"I mean the horrible stories that I was hearing that when my dad went into the hospital, it was like, you know, I knew I wouldn’t be able to visit," said Rose. "I mean, I just didn’t think that he would make it."

Then the virus hit Adele, too. Doctors sent her to St. Joseph’s Hospital.

"But it didn’t matter because they wouldn’t have been able to see each other anyway or even be capable of seeing each other if they could," said Rose.

Miraculously, they recovered. John was sent to the Ebenezer Ridges Transitional Care Unit in Burnsville after getting out of the hospital.

“You know, I think John’s mood was a little bit down when he first came in because he wasn’t with Adele but definitely the day that she came, you could see his spirits changed, his spirits were lifted," said social worker Stephanie Baker with Ebenezer Ridges.

"We couldn’t sleep together at night," said Adele.

"I used to lay with her at night when we would go to bed," said John.

They spent three weeks in rehab at Ebenezer and then, finally, they were both back home.

"It was great for the staff to see that success and to see how happy John and Adele were," said Baker. "To be together, to go home together and really live to explain what they went through during this time."

"So the improvement has been pretty amazing and I just very thankful they came through," added Rose.

All back to the love story 69 years in the making. John and Adele are still blessed to live independently with the help of their daughter Pam.