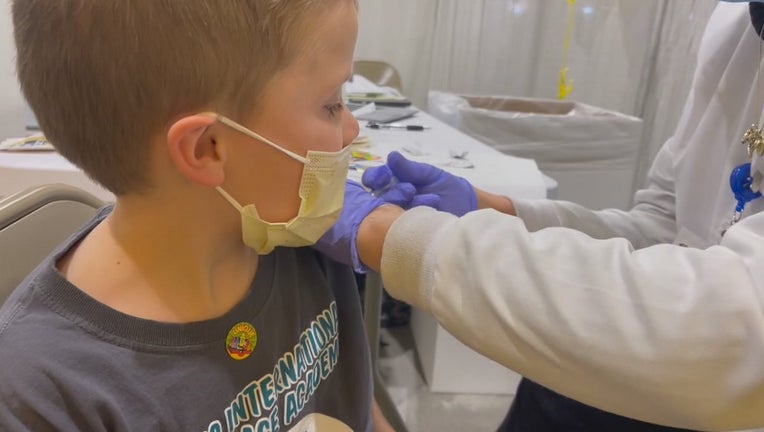 Younger children in Minnesota got their first chance to get the COVID-19 vaccination on Wednesday. (FOX 9)

BLOOMINGTON, Minn. (FOX 9) - On the first day that kids ages 5 to 11 could get vaccinated against COVID-19, a steady stream of parents and kids walked into the state vaccination site at Mall of America. Not all the kids were excited, but the parents certainly were.

"We just want to keep them safe. We’ve been waiting for this so long," said Lindsey Barringer, who brought her 5- and 6-year-old daughters. "Super relieved! Super relieved and kind of just excited like it’s graduation day!"

On the first day that kids ages 5 to 11 could get vaccinated against COVID-19, a steady stream of parents and kids walked into the state vaccination site at Mall of America.

Her 6-year-old daughter, Ruby, who said the shot only felt "prickly," said she was happy to get it "because now I get to go to gymnastics, get to go to Target. Yeah, I can go places."

The first shipment of the child version of the Pfizer vaccine, which are one third of the dose that those 12 and older get, arrived in Minnesota on Monday.  They were pre-positioned at the Mall of America site, and as soon as the CDC approval came Tuesday night, appointments were opened. They were gone in under an hour.

"We’re prepared to have a big push over the next few weeks," said Governor Walz, who was on hand to mark the start of this next phase of vaccinations.

"There are ample opportunities out there across the state and in multiple places," Walz said. "I’ll be out tomorrow as we take these into our schools and make it even easier for parents and our little ones to get vaccinated."

Minnesota’s Health Commissioner, Jan Malcolm, told FOX 9 that pharmacies had begun receiving shipments on Wednesday and would continue to get them into early next week.

Some pharmacies had posted appointments, which filled quickly, but many told the state they were waiting until they had vaccines on hand before posting any appointments online.  The message:  be patient.  By early next week, she believes, it’ll be far easier to find an appointment for children.

She also noted that there have been 45,000 pediatric cases of Covid-19 since July.

"Thankfully the percentage of cases that are severe is quite low," said Malcolm. But it still adds up to a lot.  300 children hospitalized in Minnesota."