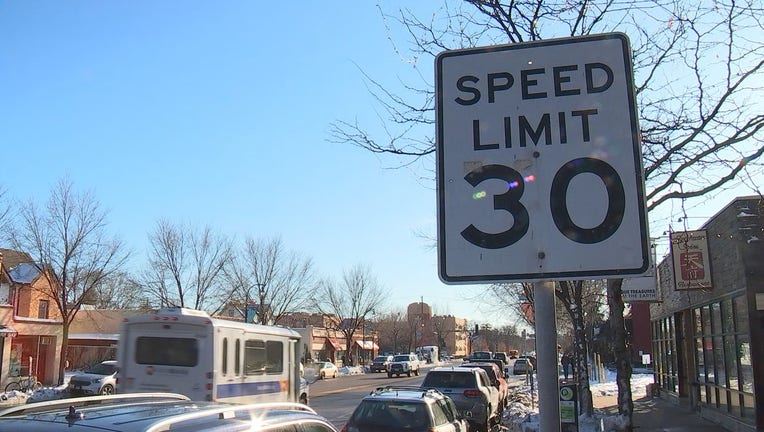 30 mile-per-hour speed limit signs like this one on Lyndale Avenue in Minneapolis could be lowered to 25 under a new proposal.

When it comes to a well-traveled road like Lyndale Avenue, which has a 30 mile-per-hour speed limit, residents have criticized its poor safety.

A city-wide speed limit decrease was the topic of conversation at city hall Tuesday.

For Jesse Lorenz, a Minneapolis resident, the road is a “Car sewer, and it’s killing people.”

Lorenz was the only resident to testify at a Minneapolis Transportation Committee meeting Tuesday as the city moved toward lowering the speed limit on city streets.

“I support this very strongly,” he said. “I have two small children and the leading cause of death for their age group is being hit by a driver in a motor vehicle. I think that this can’t come soon enough.”

The new authority for city to decide their own speed limits became law in August. Two months ago, St. Paul voted to move forward with its own speed limit reduction.

City of St. Paul documents show that they hope to collaborate with Minneapolis and lower speed limits next summer once they complete research on the subject.

Last May, the FOX 9 Investigators showed how a few more miles per hour can make an exponential difference to pedestrian injury and death.

“No less than three times last year, I came within less than a foot from being hit by other drivers as I was a pedestrian crossing,” said Andrew Johnson, a Minneapolis City Councilor.

Lyndale Avenue and other high-traffic roads still belong to the county, so Hennepin County will need to follow suit and speed is not the only issue.

“I think it’s important to lower the speed limits. I think it’s an important first step,” said Lorenz. “But, we really need to change the road design to make the streets safer for everyone.”