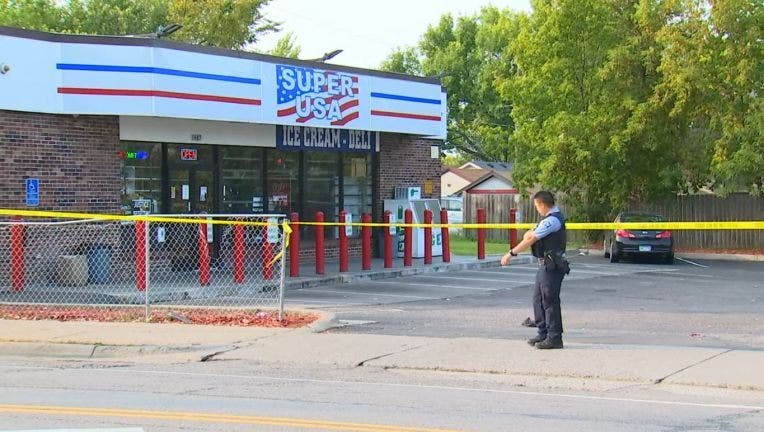 The scene of a shooting at a Super USA in Minneapolis that left a 17-year-old dead. Monday, another 17-year-old was charged with murder for his role in the incident.

MINNEAPOLIS (FOX 9) - A 17-year-old Minneapolis teen has been charged with second-degree murder after police say he shot one teen and attempted to murder an adult man.

The Hennepin County Attorney’s Office announced the charges Monday in conjunction with two felony firearm possession charges and another count of fleeing a peace officer in a motor vehicle.

Prosecutors are hoping to try the 17-year-old as an adult.

According to the juvenile petitions, on Sept. 14, police responded to a gas station on Fremont Avenue North and Dowling Avenue North. Upon arrival, officers found a 17-year-old and 19-year-old male victim. The 17-year-old victim was shot three times and the 19-year-old was shot on the right side of his torso.

Both were taken to the hospital where the 17-year-old died, according to the charges.

11 cartridge casings were found at the scene. Investigators determined one weapon fired seven of the shots and another weapon fired four other rounds.

Three days later, police were conducting surveillance on the 17-year-old suspect and tried stopping him at 7th Street and Lyndale Avenue North. The suspect fled and started driving through the North Loop in downtown Minneapolis, where he threw a cellphone and a gun out of the window. The gun matched the firearm that was used in the murder three days earlier.

The suspect then entered I-394 West, driving through the barricades of the HOV lane and driving the wrong way towards oncoming traffic.

He entered northbound Hwy. 169 and exited at Medicine Lake Road. Golden Valley Police joined the pursuit, eventually hitting the teen’s care in Plymouth, ending the chase. The 17-year-old was pulled from his car and detained. Another revolver was found in his car during a search.