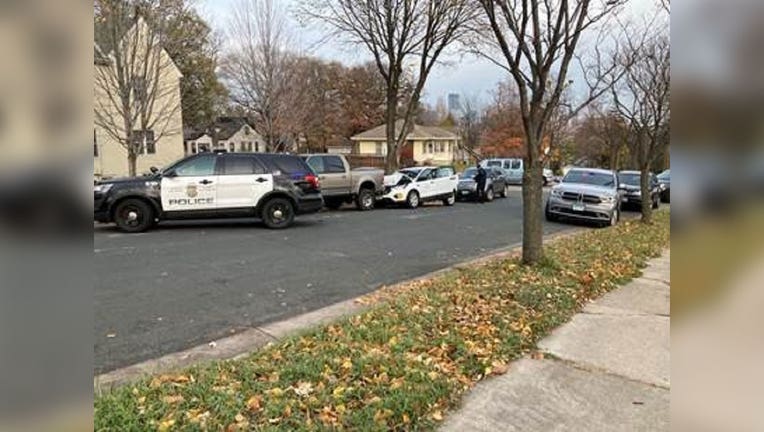 Police block traffic near Penn Avenue South and Mount View Avenue after the crash of the Minneapolis city vehicle. (FOX 9)

MINNEAPOLIS (FOX 9) - A Minneapolis city vehicle was taken from a worker by force during a carjacking on Tuesday, police say.

According to a Minneapolis police spokesperson, the worker with Minneapolis Regulatory Services was sitting in his car near 39th Avenue North and Sheridan Avenue North around 2:30 p.m. when he was approached by two men.

The men told the worker to get out of the vehicle and hand over his wallet or he'd be shot. The worker complied and the men left the scene in the city vehicle. The worker was not hurt in the incident.

The victim's work phone was in the vehicle, but he was able to call 911 with his personal vehicle.

Using the work phone's GPS and a helicopter, officers were able to track the vehicle to the area of Newton Avenue and Glenwood Avenue. At that point, three passengers inside the vehicle ran on foot but were arrested.

The driver of the vehicle drove from the scene and crashed near Penn Avenue South and Mount View Avenue. The driver was arrested and taken to the hospital for observation. The city vehicle was damaged in the crash.

The 18-year-old driver was booked on charges of robbery and fleeing police.

UPDATE: Charges filed on Thursday list 18-year-old Dennis Huff of Chaska as the suspect charged with aggravated robbery and fleeing in the case. In court papers, police say another man who was with Huff admitted Huff told the victim he had a gun and took the vehicle.

That man told police they drove from the scene and picked up two women. However, when speaking with police, Huff denied robbing anyone but admitted to driving the stolen vehicle.

According to the charges, Huff couldn't tell police how he got the car, claiming "he had been using drugs and sometimes blacks out."