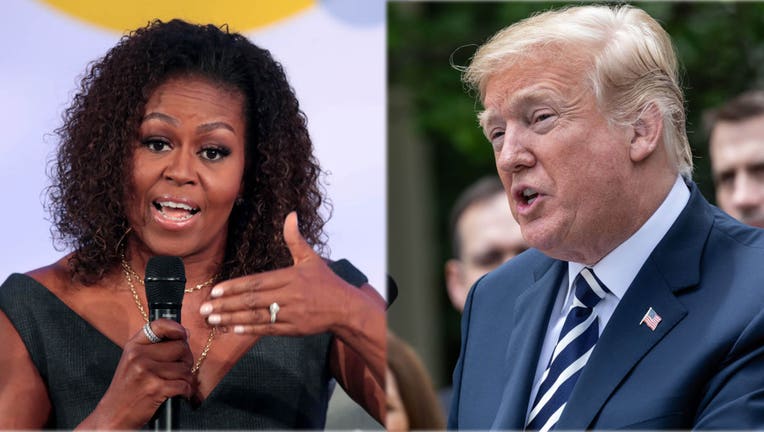 Former first lady Michelle Obama speaks to guests at the Obama Foundation Summit at Illinois Institute of Technology on Oct. 29, 2019 in Chicago, Illinois, alongside President Donald Trump speaking before he signs S. 2372, the VA Mission Act of 2018,

WASHINGTON - For the third year in a row, former first lady Michelle Obama has been named the most admired woman of 2020, while President Donald Trump has unseated her husband, former President Barack Obama, as the nation’s most admired man, according to a new Gallup poll.

Trump’s first-place ranking in 2020 ends Barack Obama’s 12-year run as most admired man in the Gallup poll, tied with former President Dwight Eisenhower for the most ever.

Vice President-elect Kamala Harris came in second as the most admired woman, according to the poll.

"The incumbent president is usually top of mind when Gallup asks Americans to name, without prompting, which man living anywhere in the world they admire most," Gallup said in a statement, which has conducted the poll since 1946.

Gallup said 48% of Republicans polled named Trump this year, with no other public figure receiving more than 2% of Republicans' votes. Barack Obama was the top choice among Democrats at 32%, but was down from 41% in 2019.

Dr. Anthony Fauci, the nation's top infectious disease expert, was named by 5% of Democrats polled, but only 1% of Republicans, Gallup said.

Independent voters were evenly split between Trump (11%) and Obama (11%), with another 3% naming Biden and 2% Fauci.

Women who were first lady have also commonly been named most admired woman, Gallup said. In the 71 times the company has asked the public to name a female they admire most, either a current (18) or a former (39) first lady has won a total of 57 times.

The former first lady's new podcast will hold candid conversations with a focus on relationships and health.

This year, 10% of Americans named Michelle Obama as most admired woman, 6% named Harris, and 4% named current first lady Melania Trump. Trump has been in the top 10 each of the past four years but has never finished first, joining Bess Truman and Lady Bird Johnson as former or current first ladies not to have received the distinction.

RELATED: Georgia elementary school to be renamed for Michelle Obama

Queen Elizabeth's top 10 finish this year is her 52nd — far more than any other woman. Margaret Thatcher is second with 34 top 10 appearances, followed by Winfrey at 33 and Clinton with 29.