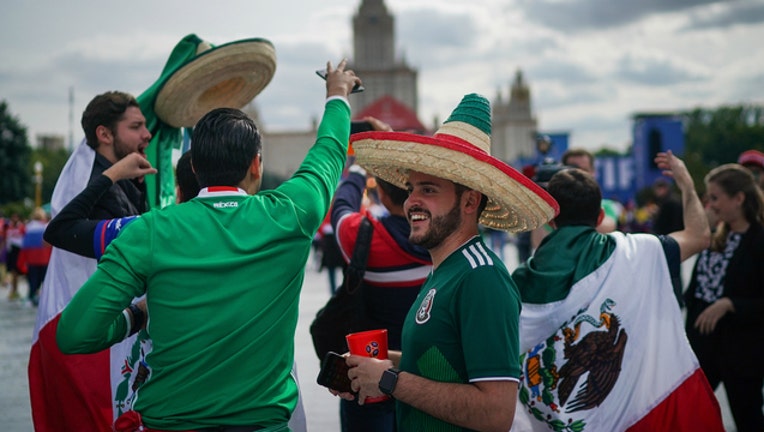 The 1-0 stunner, with Hirving Lozano scoring the winning goal, has given Mexicans hope that their team might win the tournament for the first time ever. Mexico has competed in the FIFA World Cup since the sporting event kicked off in 1930. The highest it has ever advanced is to the quarter-finals, placing sixth in both 1986 and 1970.

Lozano's goal set off such a commotion that seismic detectors in Mexico City registered a false earthquake, which the geological institute said may have been generated by "massive jumps" across the city. Spectators who had gathered to watch the match on a big TV screen in the central Zocalo square screamed with joy after the score.

After the match, throngs of fans dressed in green converged around the iconic Angel of Independence monument, bouncing with joy and waving the Mexican flag. Small groups chanted "Mexico" and "Yes we could!" Some broke into song, including the traditional Cielito Lindo tune best known for its "Ay, Ay, Ay, Ay" chorus. Car horns blared, whistles were blown and drums beat for hours after the match.

"We aspire to win a World Cup this time," said Miguel Paez, a 31-year-old who donned a Mexican wrestling mask in the colors of the national flag as he celebrated on Mexico City's main avenue, Paseo de la Reforma.

Paez described the game as a welcome distraction from Mexico's upcoming July 1 presidential election. "Mexico needs a break. Mexico needs to shout," he said, jumping up and down.

Some Twitter commentators and fans were quick to draw parallels between the Mexican team's long odds ahead of the Germany match and the big lead in surveys enjoyed by leftist presidential candidate Andres Manuel Lopez Obrador, or AMLO.

"AMLO can be beat. The surveys are based on few people," said Jose Antonio Bohon, a 51-year-old national team supporter on his way to the Angel.

The win has also helped Mexican fans move beyond the team's recent indiscretions.

The Mexican squad entered the 2018 tournament under a cloud of scandal. The problems began last year when the US Treasury Department accused team captain Rafael Marquez of being a front man for a drug kingpin. The accusation cost Marquez sponsorships and called into question whether he would play in the tournament. Marquez took to the field toward the end of Sunday's match against Germany, notching his fifth appearance in a World Cup.

Also, earlier in June, gossip magazine TVNotas reported that nine members of the Mexican squad indulged in an all-night party with 30 female escorts following their farewell match against Scotland in Mexico City. Commentators worried that family tensions could distract the players from their goal of winning World Cup matches.

"They've always done things like that," 53-year-old fan Magdalena Martinez said Sunday of the partying Mexican players. "It wasn't my boyfriend or my husband, so as long as they continue to play well, who cares."