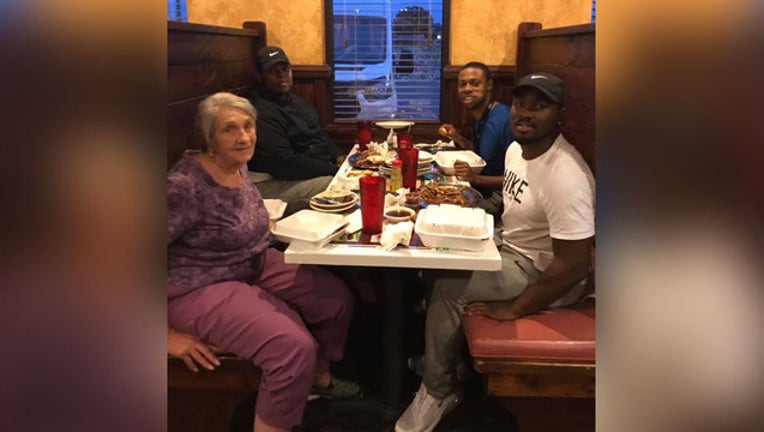 Jamario Howard and his friends saw an elderly woman sitting by herself at a restaurant. They invited her to their table and shared a heartwarming meal together. (Credit: Jamario Howard)

OXFORD, ALABAMA (FOX 46 CHARLOTTE) - An Alabama man and his friends shared a heartwarming meal with an elderly woman after seeing her sitting by herself at a restaurant Thursday night.

On April 18, Jamario Howard says he and a friend went out to eat, and happened to notice the elderly woman sitting alone.

"My exact thoughts was 'dang, I’d hate to have to eat alone.' So after thinking about it a minute I walked over to her and asked if I could sit with her," Jamario wrote in a Facebook post.

She said yes, and the two began talking. After a while, Eleanor told Jamario she had lost her husband, and that Friday would have been their 60th wedding anniversary. That's when he asked her to join him and his friends, which he says she was excited to do.

"This woman changed my outlook on life and how I look at other people. Everyone has a story so do not judge," he wrote.

They shared a meal together, and exchanged stories. Complete strangers, getting results for each other.

Jamario stressed that this interaction just goes to show, you never know what people are dealing with, when they may be in need, or where you can find a friend.

"The point in this is always be kind and be nice to people. You never know what they are going through."

FOX 46 reported on this story from Charlotte, N.C.