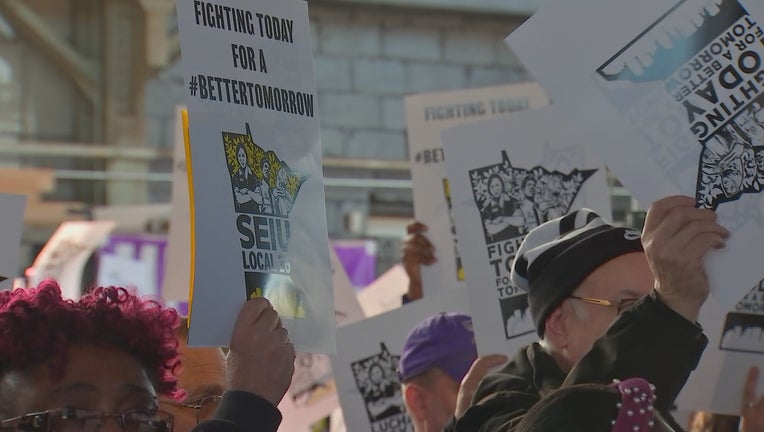 (FOX 9) - Negotiators with a union that represents support staff, including security guards and janitors in the Twin Cities, will have a new tool as talks on a new contract drag out.

The union, SEIU Local 26, which represents 8,000 workers, says they are working on seven contracts for its members but progress has been slow. Now, a vote on Saturday has given them the power to call a strike if contract talks continue to falter.

Negotiators with a union that represents support staff, including security guards and janitors in the Twin Cities, will have a new tool in their playbook as talks on a new contract drag out.

Officials say hundreds of members came together on Saturday to vote on a possible strike. For each group, the negotiations are different, leaders say. Some of the big things they're fighting for, like sick days, health care, wages, and green cleaning and conservation.

The negotiations have been ongoing for months and while the vote doesn’t call for an immediate strike, the union president says it’s a "prepare for the worst” vote.

“What today did was it had the membership of Local 26 vote to authorize the bargaining committee to call for a strike at any moment when that bargaining committee feels that conversation at the table has stalled are no longer have movement," said union president Iris Altamirano.

They'll now head back to the negotiation table next week. They anticipate a vote for window cleaners and airport workers will also happen soon. Their contracts expire just months apart.