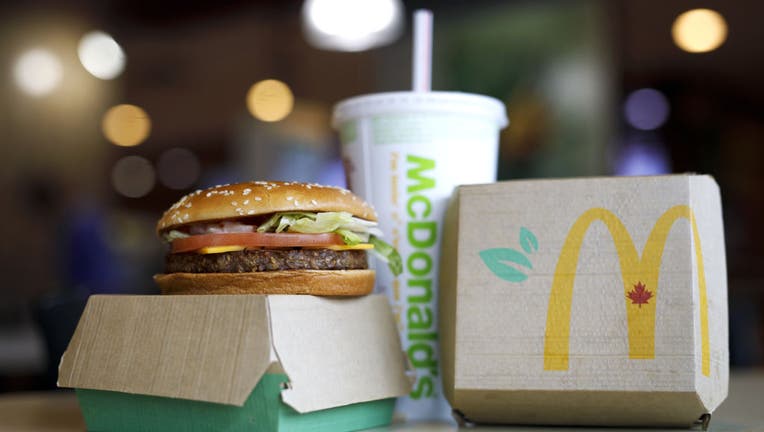 The "P.L.T." sandwich is arranged for a photograph at a McDonald's Corp. restaurant in London, Ontario, Canada, on Wednesday, Jan. 8, 2020. Fifty-two McDonald's locations in southwestern Ontario will now serve the "P.L.T." -- plant, lettuce and tomat

CHICAGO - McDonald’s is pulling the McPlant— a plant-based meat burger— off its menu for now at select U.S. restaurants.

The fast-food chain confirmed to FOX Television Stations that the test with the new menu item concluded as planned. However, the company has not announced or confirmed future plans for its U.S. restaurants.

In October 2021, the company announced that it would test the plant-based burgers at eight U.S. restaurants in Irving and Carrollton, Texas; Cedar Falls, Iowa; Jennings and Lake Charles, Louisiana and El Segundo and Manhattan Beach, California.

The company then expanded to other markets in January 2022.

"The McPlant was created to give customers more delicious options in addition to the McDonald’s burger line-up you know and love, with fan favorites like the Big Mac® and Quarter Pounder® sandwich still available nationwide," the company said on its website.

More and more companies are hopping on the plant-based bandwagon.

The company partnered with Beyond Meat for ingredients. According to Barron’s, Beyond Meat stock fell 5.2% in recent trading to $30.75 last week. The shares have lost about half their value this year, according to the outlet.

The El Segundo, California, company also said its revenue rose 1.2% to $109.5 million in the January-March period. Wall Street had forecast revenue of $112 million, according to analysts polled by FactSet.

Beyond Meat President and CEO Ethan Brown said lowering prices in order to achieve parity with animal-based meat products remains the company’s long-term goal. But in the first quarter, he said, the company felt pressure to drop prices because of a raft of new competitors, including lower-priced store brands.

FOX Television Stations has reached out to Beyond Meat for comment.