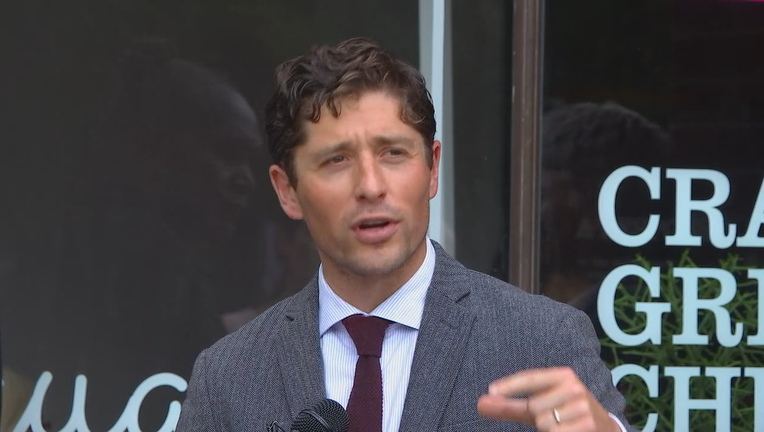 MINNEAPOLIS (FOX 9) - Minneapolis Mayor Jacob Frey is proposing to eliminate cash bail for many low-level offenses in the city, saying the current setup is unfair to low-income people.

Frey’s 2020 budget includes $100,000 to hire a social worker to create so-called “release plans” for people arrested on misdemeanor crimes. Frey said he expected the one-year pilot program would help 1,000 people and predicted that it would work so well, it would expand statewide.

“Cash bail has been actually shown to increase recidivism down the road,” Frey said at a news conference Wednesday. “So eliminating cash bail can actually cut down on crime.”

Segal and Frey said it costs $144 per day for Minneapolis to lock a person up in pre-trial jail. Moriarty said that was an “inappropriate and expensive option.”

Misdemeanor crimes including disorderly conduct, theft, shoplifting, trespassing and loitering would be included in the program. A criminal record would not disqualify someone, said Deputy City Attorney Mary Ellen Heng.

“If this is the time that something helps them and we don’t see them back -- I don’t care if it’s their 50th offense. My goal is to not have them back in the system,” said Heng, who leads her office’s criminal division.

But the city’s police union raised concerns that it would lead to more people failing to show up for court.

“This is not well thought out at all,” said Lt. Bob Kroll, the union’s president. “I’m very skeptical. I think it places a lot of trust in people who have not shown that they’re worthy of that trust.”

Kroll said many of the people arrested for low-level crimes don’t have a permanent address, which will make it difficult to track them down for skipping court appearances.

“You’re just going to let them go on a wing and a prayer that they’re going to come back? They’re not going to,” he said.

Several Democratic presidential candidates have endorsed plans to eliminate or significantly curtail the use of cash bail. Among them: frontrunners Joe Biden, Elizabeth Warren and Bernie Sanders, as well as U.S. Sen. Amy Klobuchar of Minnesota.

Warren rolled out her proposal to eliminate cash bail during an appearance in Minneapolis last month.

State lawmakers considered it during the 2019 session, but the measure ultimately failed. Republicans were largely against the idea.

Ron Blume, president of Midwest Bonding, a bail bonds company in Winona, said efforts to change the cash bail system in other states have led to fewer people showing up for court.

“The current pretrial accountability system has worked for hundreds of years and remains the most cost effective, least restrictive, and most reliable form of pretrial release available,” Blume said in an emailed statement.

“People show up for their court dates more often (with alternatives to cash bail), which is the purported goal. And long term, crime is reduced, so this is a win-win-win all the way through,” the mayor said. “And obviously, if it works well, we want to expand it even further.”