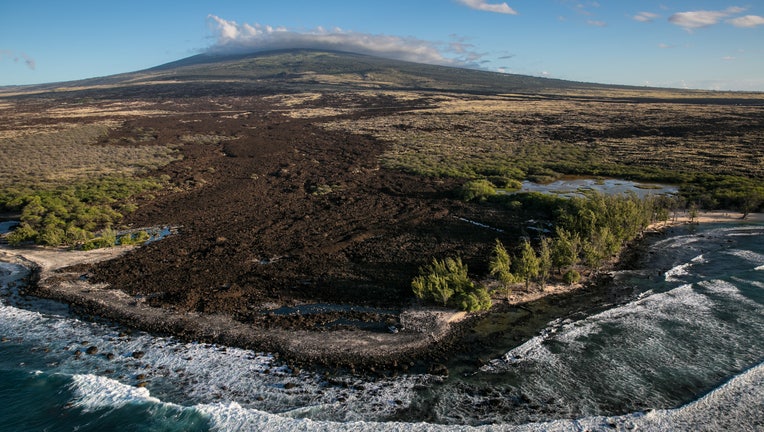 A deserted beach at the edge on an old Mauna Loa lava flow is viewed on December 16, 2016, in this aerial photo taken along the Kona Kohala Coast, Hawaii. (Photo by George Rose/Getty Images)

The ground is shaking and swelling at Mauna Loa, the largest active volcano in the world, indicating that it could erupt.

Scientists say they don't expect that to happen right away but officials on the Big Island of Hawaii are telling residents to be prepared in case it does erupt soon.

Here's are some things to know about the volcano.

Where is Mauna Loa? 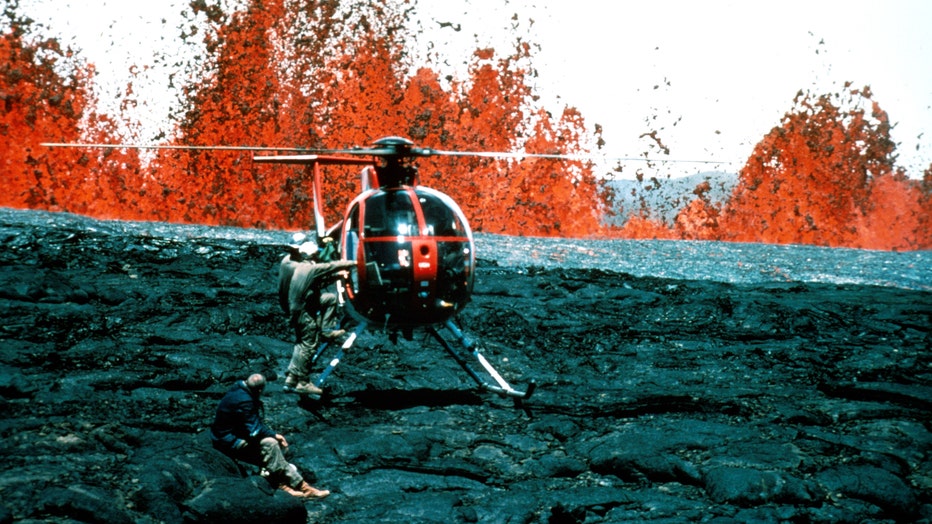 Mauna Loa is one of five volcanoes that together make up the Big Island of Hawaii, which is the southernmost island in the Hawaiian archipelago. It's not the tallest (that title goes to Mauna Kea) but it's the largest and makes up about half of the island's land mass.

It sits immediately north of Kilauea volcano, which is currently erupting from its summit crater. Kilauea is well-known for a 2018 eruption that destroyed 700 homes and sent rivers of lava spreading across farms and into the ocean.

The Big Island is mostly rural and is home to cattle ranches, coffee farms and beach resorts. It's about 200 miles (320 kilometers) south of Hawaii's most populous island, Oahu, where the state capital Honolulu and beach resort Waikiki are both located.

Mauna Loa's eruptions differ from Kilauea's in part because it is taller. It's greater height gives it steeper slopes, which allow lava to rush down its hillsides faster than Kilauea's.

It's enormous size may allow it to store more magma, leading to larger lava flows when an eruption occurs.

Frank Trusdell, research geologist at the Hawaiian Volcano Observatory, which is part of the U.S. Geological Survey, said data indicates that Mauna Loa has a much larger magma reservoir than Kilauea, which may allow it to hold more lava and rest longer between eruptions than Kilauea.

Where will Mauna Loa erupt from? 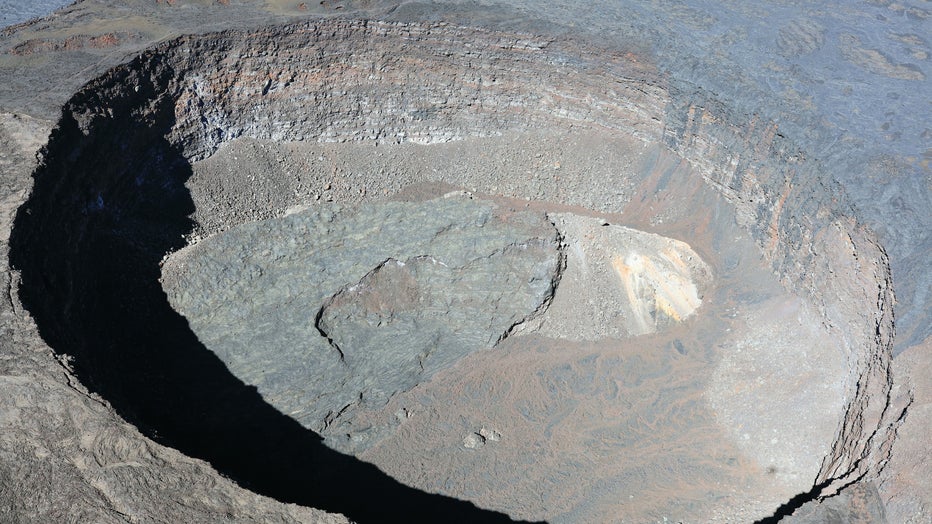 Lua Poholo, a pit crater located on the northern side of Moku‘āweoweo, Mauna Loa’s summit caldera, near where the Northeast Rift Zone meets the summit caldera. USGS image by K. Mulliken.

Scientists won't know until the eruption begins. Each eruption since 1843 started at the summit. Half the time, the volcano later also began erupting from vents at lower elevations. The other half of the time it only erupted in the summit caldera.

Scientists can't tell far in advance when and where Mauna Loa will open new vents and erupt.

Vents generally form along the volcano's rift zone. That's where the mountain is splitting apart, the rock is cracked and relatively weak and it's easier for magma to emerge.

An eruption from vents on the southwest rift zone could hit residential communities, coffee farms or coastal villages on the west side of the island. Lava could reach homes in just hours or days.

The west side's most populous town would be protected from any Mauna Loa eruption by the presence of another active volcano. The broad flanks of that volcano, Hualalai, sit between Mauna Loa's southwest rift zone and Kailua-Kona and would block any lava heading toward the coastal community.

An eruption from the northeast rift zone could send lava toward the county seat of Hilo or other towns in East Hawaii. It could take lava weeks or months to reach populated areas on this side of the mountain.

Scott Rowland, a geologist at the University of Hawaii at Manoa, said there's no pattern when it comes to where an eruption will occur.

"Just because the last one was on the northeast rift zone does not mean the next one will be down the southwest rift zone," he said. 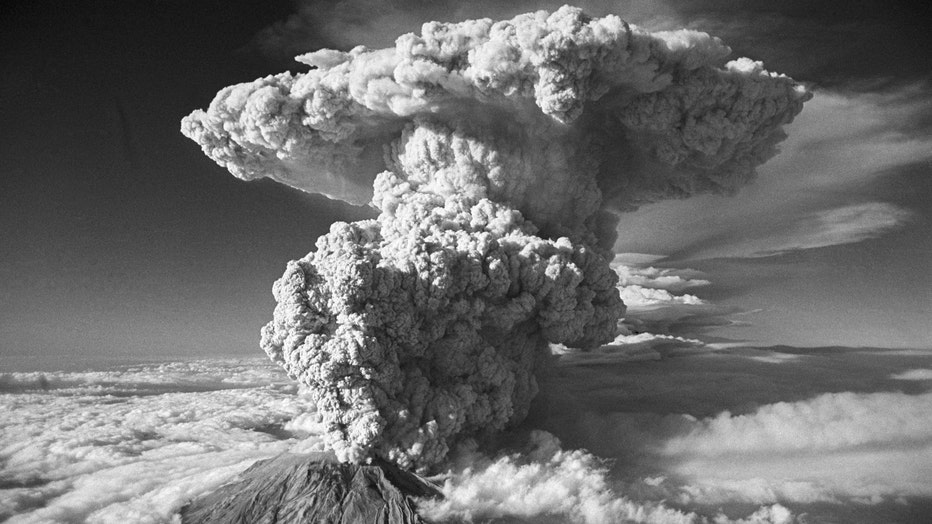 Spirit Lake, WA- Looking more like a smoke cloud from an A-bomb blast than steam and ash from a volcano eruption, Mt. St. Helens sent this plume of steam and ash some 60,000 feet in the air, as the volcano awoke from a six-week nap. (Getty Images)

Fifty-seven people died when Washington state's Mount St. Helens erupted in 1980 and blasted more than 1,300 feet (400 meters) off the top of the mountain. Steam, rocks and volcanic gas burst upward and outward. A plume of volcanic ash rose over 80,000 feet (24,384 meters) and rained down as far as 250 miles (400 kilometers) away.

The magma in Mount St. Helens tends to be stickier and traps more gas, making it much more likely to explode when it rises.

The gas in the magma of Hawaii’s volcanoes tends to escape, and so lava flows down the side of their mountains when they erupt.

Hawaii's volcanoes are called shield volcanoes because successive lava flows over hundreds of thousands of years build broad mountains that resemble the shape of a warrior's shield.

Shield volcanos are also found in California and Idaho as well as Iceland and the Galapagos Islands. Alaska's Wrangell-St. Elias National Park has eight shield volcanoes including Mount Wrangell.

Volcanoes like Mount St. Helens are called composite or stratovolcanoes. Their steep, conical slopes are built by the eruption of viscous lava flows and rock, ash and gas. Japan's Mount Fuji is another example of a composite volcano.

How do scientists monitor Mauna Loa? 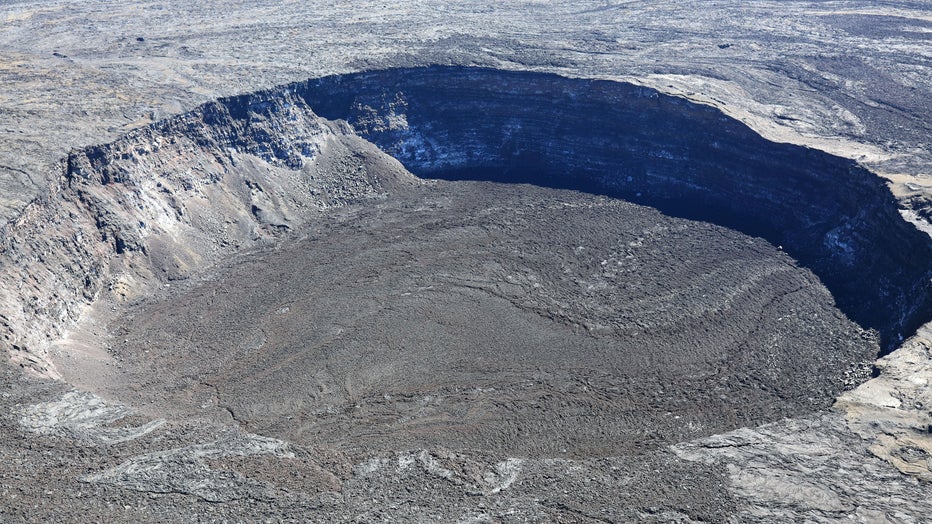 Lua Hou, a pit crater located at the southern extent of Moku‘āweoweo, near where it meets the Southwest Rift Zone. USGS image by K. Mulliken.

The Hawaiian Volcano Observatory has more than 60 GPS stations on Mauna Loa taking measurements to estimate the location and the amount of magma accumulating beneath the surface.

Scientists use tiltmeters to track long-term changes in the tilting of the ground, helping them identify when the ground is swelling or deflating. A rapid change in tilt can indicate when an eruption will occur.

There's also a thermal webcam at Mauna Loa's summit that will identify the presence of heat. And satellite radar can keep track of ground swelling and deflation.