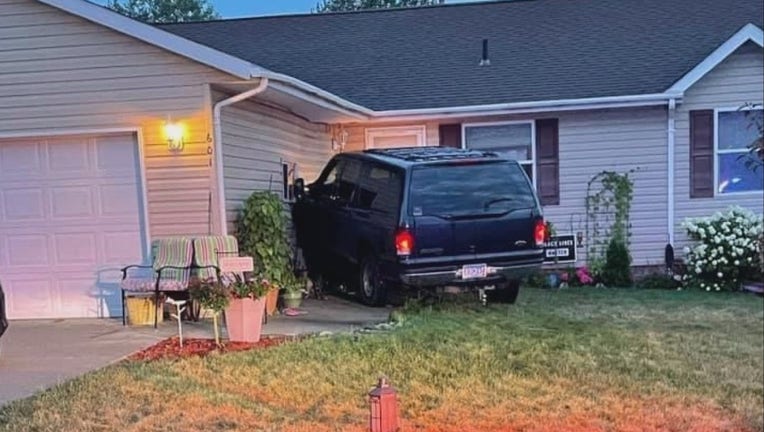 Cold Spring police are investigating after a man allegedly drove a stolen SUV into a home intentionally.

COLD SPRING, Minn. (FOX 9) - A car smashed into a Cold Spring home over the weekend in what appears to be an intentional act.

No one was hurt, but it wasn’t the first incident in what homeowners are calling an ongoing case of harassment.

Police say a man intentionally drove an SUV into a family's home in Cold Spring, Minnesota.

The family said they had been dealing with online attacks prior to the crash, and at 5:30 a.m. Sunday, an SUV crashed into the home as the family was sleeping.

"I was amazed and kinda in shock," said Anthony T. Robinson, who was home at the time.

The family said they don’t know the man behind the attacks. The suspect, Benton Beyer, is accused of harassing the Robinson family for weeks. FOX 9 spoke with the Robinsons back in May when they were dealing with racist online attacks towards the couple’s teenage daughter.

"She wanted to kill herself. It was to the point of her wanting to take her life," said Andrea Robinson, Olivia’s mother.

"It did break me a lot, just knowing there’s people that could do that," Olivia Williams said. "Like I said, they didn’t know me so that hurt a lot at the time."

Around the same time, in an unrelated case, Benton Beyer started harassing the family by driving back and forth in front of the family home, stalking them and more. In two months, 18 calls to police were made by the Robinsons because of Beyer. A harassment restraining order was issued on May 21. Then, he was arrested on July 15 after he allegedly stalked Andrea Robinson.

Then, on Saturday, Beyer allegedly stole a car, drove it into the home with a large piece of granite on the accelerator, and ran away. There was also a teddy bear found hanging from a noose in the car.

"We don’t want to come to any conclusions," Anthony T. Robinson said. "We just want equal justice before it gets too far."

Police found Beyer several hours later and made the arrest. He’s currently in the Stearns County jail on charges of theft, stalking, damage to property and harassment.