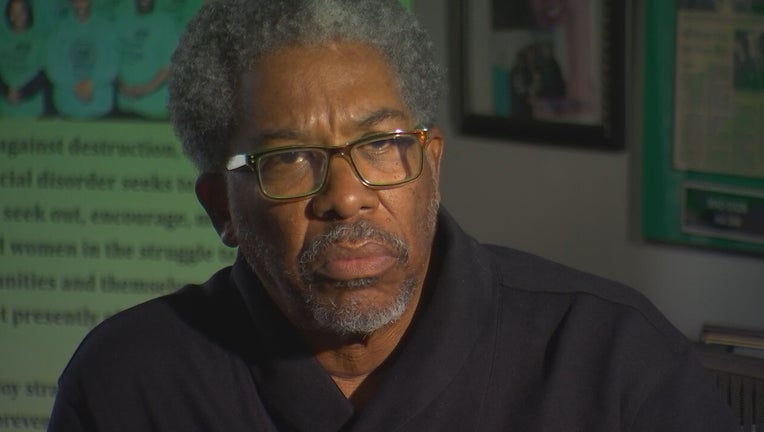 VJ Smith has been an advocate against violent crime in the Twin Cities for more than 20 years. (FOX 9)

MINNEAPOLIS (FOX 9) - For more than 20 years, VJ Smith has been a foot soldier in the battle against violent crime in Minneapolis as leader of the nonprofit group MAD DADS.

But in recent weeks, Smith has become embroiled in allegations of sexual harassment from two former employees, and separately, police are investigating whether he has extorted sex from women during his outreach work.

For more than 20 years, VJ Smith has been a foot soldier in the battle against violent crime in Minneapolis as leader of the non-profit group MAD DADS.

The criminal investigation began in November when a member of the Minneapolis Park & Recreation Board (MPRB) received a tip from the community that Smith, while doing homeless outreach in Powderhorn Park, allegedly offered vulnerable women money, or other services like housing, in exchange for sexual contact.

The Minneapolis Park & Recreation Board and the City of Minneapolis have contracts with MAD DADS for outreach services. To avoid a conflict of interest, the criminal investigation is being handled by the Anoka County Sheriff’s Office.

The national MAD DADS organization recently removed VJ Smith as its president and from its board of directors, but the national group’s current president, George Spencer, would not say why.

The trouble for VJ Smith spilled into the open in early November, when Smith said his social media accounts had been hacked while he was in the hospital recovering from COVID-19.

"You’re getting stuff.  Just know that I’ve been hacked," he said in a video posted on Facebook November 2. "I’m not sending you anything other than the positive stuff I always do."

Smith did not mention the sexually explicit videos and text messages that had been circulating on social media, showing Smith, a married minister, touching himself in one video, and fondling a woman’s breast in another.

According to two former employees of MAD DADS it fits a broader pattern.  Both women say they were repeatedly sexually harassed.

"It became a pat on the butt, or rub up the thigh, or rub up against you...‘I need some of that,’" said a former employee who was laid off two years ago.

"One night, I’m leaving the office, ‘Goodbye,’ as usual.  I turn around and he’s right there and he sticks his tongue in my mouth," she said.

On Wednesday, November 16, the more recent employee told police she was assaulted by Smith after he asked her to come to his South Minneapolis apartment. She said Smith accused her of betraying him and working in concert with his other accuser.

Both women said they had a sexual relationship with Smith that was consensual, but coerced. They said they thought their jobs depended on it.

"If you’re on the verge of being homeless, you don’t know what to do," said one of the women.

FOX 9 agreed not to disclose either woman’s identity because they work in the close-knit nonprofit community and said they fear retaliation.

The former employee laid off two years ago said she was told it was because of a lack of money, and she acknowledges the budget for MAD DADS was tight.

But she doesn’t believe it was a coincidence that she had ended her sexual relationship with VJ Smith two weeks earlier.

"I said, ‘Am I terminated? All because I wouldn’t tell you I love you and I won’t let you sleep on me anymore?’" she recalled.

The women, who did not know of each other until a couple months ago, said Smith showered them with small gifts and cash, which he followed up with sexual and solicitous voicemails they shared with the FOX 9 Investigators.

VJ Smith: "I’ve made some mistakes"

In an interview last month, Smith said "It’s not appropriate," to have sex with an employee.  Asked if that is something he has done, Smith repeated, "It’s definitely not appropriate."

"This is what I will say: I have made some mistakes, but I want to seek legal advice on this," said Smith.

Smith was joined in the interview with John Turnipseed, president of the board that oversees the Minneapolis chapter of MAD DADS, which is an acronym for Men Against Destruction, Defending Against Drugs and Social Disorder.

Turnipseed acknowledged he learned about Smith’s relationship with the former employee when she was laid off two years ago. Turnipseed said ‘preventive measures’ were put in place to discourage romantic relationships, but he would not elaborate or describe those measures.

Both women said their experience left them depressed, with thoughts of suicide. They consider it a betrayal of trust.

"I thought of him being a religious leader, I thought it was okay to disclose my pain and trauma.  I didn’t realize that was part of the grooming process," said one of the women.

Smith also denied last month that he had any sexual relationship with women he came in contact with through his outreach work for MAD DADS.

The initial police report received by Minneapolis Park Police on November 18 classifies the case as "Extortion/Blackmail – Attempted," and said, "Officers received information on one making remarks about extorting people at the above park (Powderhorn)."

The report lists a single unnamed woman as a victim.  It does not name VJ Smith, but two sources confirm he is the subject of the investigation. The report notes a "jurisdiction transfer" to the Anoka County Sheriff’s Office.

The Anoka County Sheriff’s Office declined to discuss its investigation.  A public police report reveals it is an investigation of "sex crimes."

Anoka County detectives are also investigating cases referred by Minneapolis Police connected to the hacking of Smith’s phone and the allegation of assault from his accuser.

That report said, "The victim came into the 5th Precinct to report that someone had somehow removed explicit pictures he had on his phone and were putting them out onto social media."

The FOX 9 Investigators found Smith at the 5th Police Precinct again last week, a few hours after the alleged assault of his former employee.  He declined to comment.