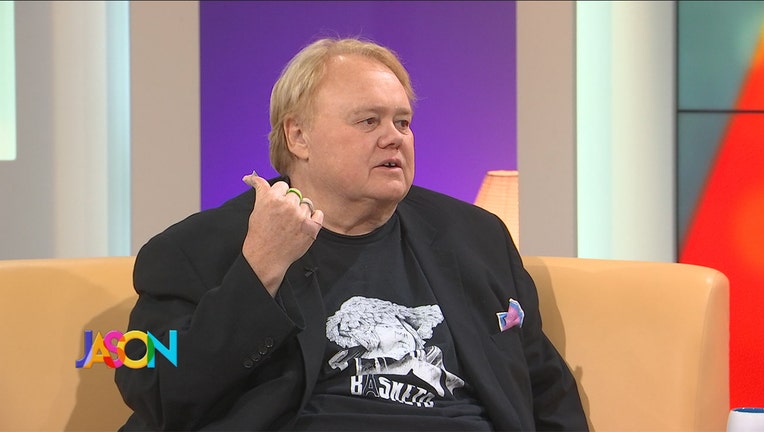 Comedian Louie Anderson was known to perform throughout Minnesota, as well as, visit KMSP FOX 9's The Jason show.

(FOX 9) - Louie Anderson, an actor and comedian who starred in 'Baskets' and as the 'Family Feud' host, has died at age 68 after a battle with blood cancer.

Anderson died at a hospital in Las Vegas of complications from cancer, said Glenn Schwartz, his longtime publicist. Anderson had a type of non-Hodgkin lymphoma, Schwartz said previously.

St. Paul native Louie Anderson, known as an actor and comedian who starred in 'Baskets' and as the 'Family Feud' host, has died at age 68.

Comedian Pauly Shore Tweeted yesterday that he had visited Anderson just before his death, alerting other Comedy Store alumn in the process. Once owned by Shore's mother Mitzi, the Comedy Store in Los Angeles helped launch the careers of numerous comedians including, Anderson, Jim Carey, Arsenio Hall, Sam Kinison and more.

Louie Anderson’s early jobs included counseling troubled children. He changed course after winning a 1981 Midwest comedy competition, where he was spotted by veteran comic Henny Youngman, who hosted contest, according to Schwartz.

Anderson worked as a writer for Youngman and then gained onstage experience while crisscrossing the United States. His big break came in 1984 when Johnny Carson, known for showcasing promising comedians on "The Tonight Show," brought him on to perform.

He was a familiar face elsewhere on TV, including as host of a revival of the game show "Family Feud" from 1999 to 2002, and on comedy specials and in frequent late-night talk show appearances.

Anderson voiced an animated version of himself as a kid in "Life With Louie." He created the Humanitas Prize-winning cartoon series, which first aired in prime time in late 1994 before moving to Saturday morning for its 1995-98 run. Anderson won two Daytime Emmy Awards for the role.

He made guest appearances in several TV series, including "Scrubs" and "Touched by an Angel," and was on the big screen in 1988′s "Coming to America" and in last year’s sequel to the Eddie Murphy comedy.

In a magazine interview, Anderson recounted getting the role after he spotted Murphy, who he knew from working in comedy clubs, at a Los Angeles restaurant. Anderson said hello, then made a costly decision that paid off.

″Take Eddie Murphy’s check and put it on my credit card, but don’t tell him until after I leave,″ Anderson recalled telling a waiter. He ended up with a $600 charge, but Murphy called to thank him and offered to write a part for him in "Coming to America," Anderson said.

His books included "Dear Dad – Letters From An Adult Child, " a collection of letters from Anderson to his late father; "Good-bye Jumbo… Hello Cruel World," a self-help book, and "The F Word, How To Survive Your Family."

Fellow performers recalled his gentleness. "You were as gracious and kind as you were funny. Rest well!! Keep ’em laughing in Heaven," Viola Davis said on Twitter. Rita Rudner in a statement, said: "He was a kind, generous, talented man who leaves behind a legacy of laughter, love and french fries."

His survivors include sisters Lisa and Shanna Anderson.