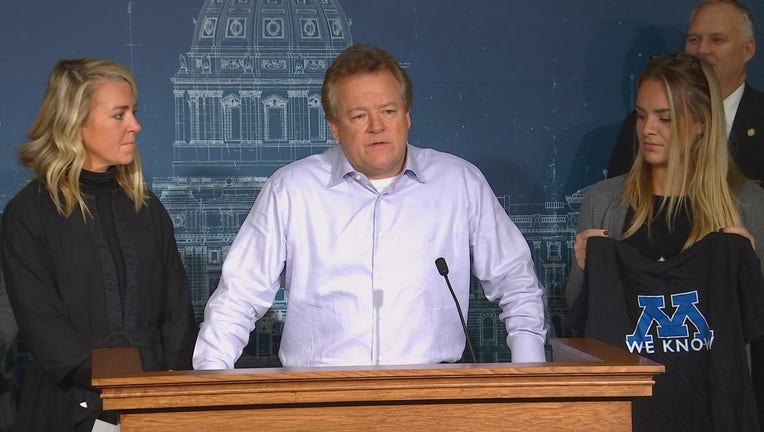 Anti-vaping legislation has been proposed thanks to some youth advocacy on the issue, but what will pass the state legislature?

ST. PAUL, Minn. (FOX 9) - The warnings were similar. But at two separate news conferences, Minnesota lawmakers on Monday foreshadowed a difficult road ahead to snuff out a vaping craze among teenagers.

Three adult Minnesotans have died and dozens more have lung injuries that state health officials say are vaping-related. But it’s the stories of students that appear to have affected lawmakers most: in the past week, students from two high schools have said e-cigarette use happens virtually unchecked in school bathrooms and even classrooms.

Lawmakers are responding to youth outcry about the vaping epidemic experts say can be mitigated by new restrictions.

For the first time since the vaping phenomenon emerged, state lawmakers rolled out plans meant to address it, ranging from increasing the buying age to outright bans on flavored e-cigarettes. In both the House and Senate, they said they expected some form of tougher regulations to pass in 2020.

“Seeing what we’ve seen with this vaping epidemic – the dangers, the flavors – I just don’t think there’s anyone that is in the same place that they were a year ago,” said state Sen. Carla Nelson, R-Rochester.

That legislation stalled this spring amid opposition from key Republican senators in Nelson’s caucus. But Nelson said she’s been “pleased with the change in attitude” since the session ended.

Nelson and Edelson also promoted a second planned bill, which would force school districts to incorporate anti-vaping information into their health curriculum. Nelson said it could be paid for using money from the state’s settlement with the tobacco companies over harmful practices.

Nelson said she also expected to introduce legislation banning all flavored e-cigarette sales, which lawmakers say are being marketed to teenagers.

Hours later, House Democrats – including Edelson – appeared in the same room in the state Capitol basement to unveil what they called a “comprehensive” plan to fight vaping.

The package of bills will include proposals similar to Nelson’s.

But it will go further, including: a ban on all flavored e-cigarette sales, outlawing online sales of all vaping products, and taxing vaping devices.

“There’s no more ‘wait and see’ with regard to the addictive nature of these products,” said state Rep. Laurie Halverson, DFL-Eagan, as she held vaping devices in her hands.

A spokesman for Altria, which owns a significant stake in JUUL, the largest e-cigarette company, said the tobacco giant supports legislation raising the purchasing age to 21.

But JUUL has also hired six lobbyists in Minnesota over the past year. Lawmakers said that’s a sign the company plans to fight tougher regulations, including an outright ban on flavored nicotine product sales.

Students from Henry Sibley High School in Mendota Heights, speaking at House Democrats’ news conference, said vaping use is rampant in their school.

“Everyone who sits in the back just puts their head down, vapes and whatnot,” said Yasiel Santiago-Castillo, a senior. To demonstrate, Santiago-Castillo wore a sweatshirt that allows a person to vape through the drawstrings, a product marketed as an incognito way to use e-cigarettes.

Schools have been slow to fight vaping use, citing a lack of funding and direction from the state. That has led students, parent groups, and community members to get involved.

Marty Davis, the chief executive of quartz countertop manufacturer Cambria, said the company has been sponsoring a program at the Minnetonka School District. Working with teachers and administrators, Davis said the project has selected some student ambassadors to deliver anti-vaping information to their peers.

Davis, who spoke at Nelson’s news conference Monday, said he hoped the program would take effect in more schools.

“For a company to attack, as they did, to basically fake out the kids, to hook ‘em on nicotine, is egregious,” Davis said. “We’re trying to make sure the kids don’t get duped.”