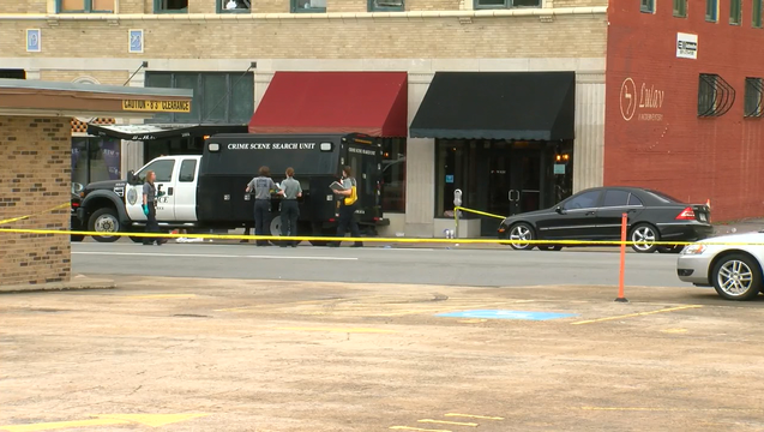 LITTLE ROCK, Ark. (AP) -- Alabama jail records show that rapper Finese 2Tymes was arrested in Birmingham the night after a shooting at one of his concerts in Little Rock, Arkansas, left 28 people injured.

The inmate roster shows that Ricky Hampton of Memphis, Tennessee, also known as Finese2Tymes, was arrested early Sunday. The U.S. Marshal Service says Hampton and another man were arrested at the Side Effects Club in Birmingham, where he was performing.

The Marshal Service says the men were arrested on a "fugitive from justice" warrant. It's not yet clear whether the arrests are related to the shooting, but Little Rock's police chief previously had said Hampton had outstanding charges in Arkansas.

Twenty-five people between the ages of 16 and 35 suffered gunshot wounds, and three others were hurt, following the shooting at the Power Ultra Lounge early Saturday.

Little Rock's police chief credits the quick work of first responders for there being no fatalities after 28 people were injured in a shooting at a rap concert.

Twenty-five people suffered gunshot wounds and three others were hurt. Police say two people were in critical condition as of Saturday afternoon.

City officials say they will move Monday to shut down the club under a "criminal abatement" program. State regulators suspended the club's liquor license on Saturday.

About 100 people gathered at a Little Rock church on Saturday night for a candlelight vigil, and Mayor Mark Stodola sat in the front row.

Robert Holt, president of Let Our Violence End and pastor at Healing Waters Outreach Center, told the crowd at the vigil, "God bless our first responders."