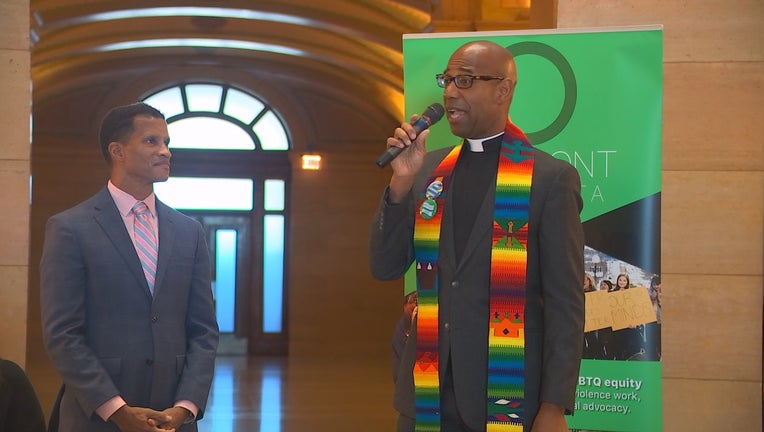 ST. PAUL, Minn. (FOX 9) - A controversial issue returns to the state capitol as LGBTQ advocates made a renewed push to ban conversion therapy on Friday.

This comes 14 years after the first bill of its kind was presented to lawmakers and one year after advocates for change came very close.

A controversial issue returns to the state capitol as LGBTQ advocates make a renewed push to ban conversion therapy.

This rally taking place on Valentine's Day is no accident. After the bill to ban conversion therapy failed last session in the 11th hour, momentum has only grown.

"Love is patient, it is kind, it does build-up," Rev. DeWayne Davis said during his comments in the Capitol Rotunda Friday afternoon.

Building support and awareness, Roger Sanchez is a conversion therapy survivor, sharing with a crowd at the capitol what he went through at 17 and 18 years old.

"To this day, I still get nightmares and night terrors, taking me back to that time," Sanchez said.

The bill was co-authored last year by the only out member of the senate, Scott Dibble, along with the only openly gay member of the House. Representative Hunter Cantrell. It aims to ban therapists from trying to convert gay children.

Last session, following emotional floor speeches, an amendment failed 34-30 when no majority Republicans voted in favor. At least one citied threats from fellow Republicans to torpedo an entire budget bill if the conversion therapy issue were attached.

This session, there seems to be bipartisan support.

Since last session, both Minneapolis and Duluth have banned the controversial therapy, and more states have added to a list of 19 across the country.

"It can be frustrating; here we are in 2020 talking about Utah and Oklahoma moving on this," Governor Tim Walz said.

The governor and lieutenant governor are vowing to get this ban done during their time in office.

"The idea that this discredited, torturous way of telling our children they are not who they are, has got to end and will end," Walz said.

This bill picks up right where it left off last session on the consent agenda in Commerce Committee in the House.