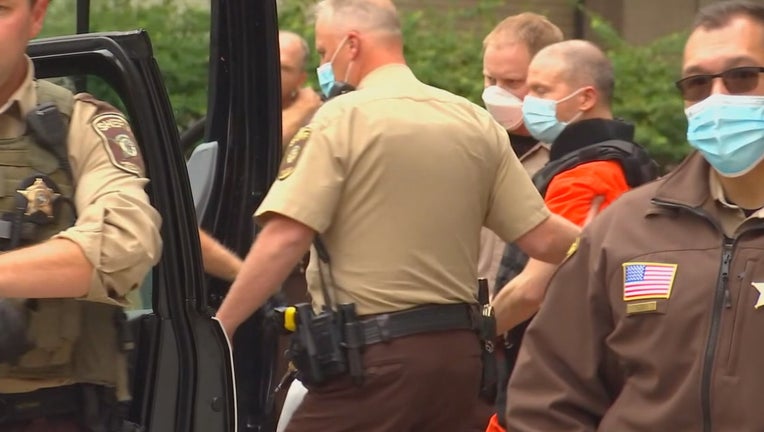 Derek Chauvin leaving one of his court appearances. The former Minneapolis police officer is charged with murder in the death of George Floyd. (FOX 9)

(FOX 9) - Monday, lawyers for the state of Minnesota will try to convince the state court of appeals to add a third-degree murder charge to former Minneapolis Police Officer Derek Chauvin’s case.

It’s a move that many legal experts say is rare and last minute.

Monday, lawyers for the state of Minnesota will try to convince the state court of appeals to add a third-degree murder charge to former Minneapolis Police Officer Derek Chauvin’s case.

Hennepin County District Court Judge Peter Cahill dismissed the third-degree murder charge against Chauvin in October, saying that it does not apply in this case. The state moved to reinstate the charge earlier this month, after the appeals court upheld the third-degree murder conviction for Mohamed Noor, the former Minneapolis officer who was found guilty in the deadly 2017 shooting of Justine Ruszczyk Damond.

With the trial of former Minneapolis police officer Derek Chauvin less than 10 days away, uncertainty is growing about safety in the coming months.

The state appealed Cahill’s rejection of their motion last week.

Attorney Steve Meshbesher said it was unexpected that the court of appeals would accept the review, calling it "very surprising."

He said Chauvin’s case has been unusual from the start, especially the state’s most recent move asking the court of appeals to allow an additional third-degree murder charge.

After the Minnesota court of appeals ruled Mohamed Noor could be charged with third-degree murder, the state filed a motion to bring that charge to Chauvin’s case, too.

"Based upon their decision in Noor, where they basically defined what third-degree murder is in Minnesota," said Michael Bryant, an attorney.

Bryant explained that since the case hasn’t been to the state supreme court yet, the ruling isn’t a legal standard.

"And that’s one of the issues the defense raised is that, right now, it’s not precedent. It’s not set law in Minnesota yet," said Bryant.

Still, he says, the fact that the appeals court agreed to listen to the state’s arguments so close to trial suggests they might rule in the state’s favor.

"Since they took it, it’s very likely they’re going to give the prosecutors a right to add this as a charge," Bryant said.

The court of appeals typically has 90 days to make a decision. With the appeals court hearing just one week before jury selection is scheduled and four weeks before opening arguments, it’s unclear if this unusual move, in this unusual case, will push the trial date back.

The hearing starts at noon Monday.