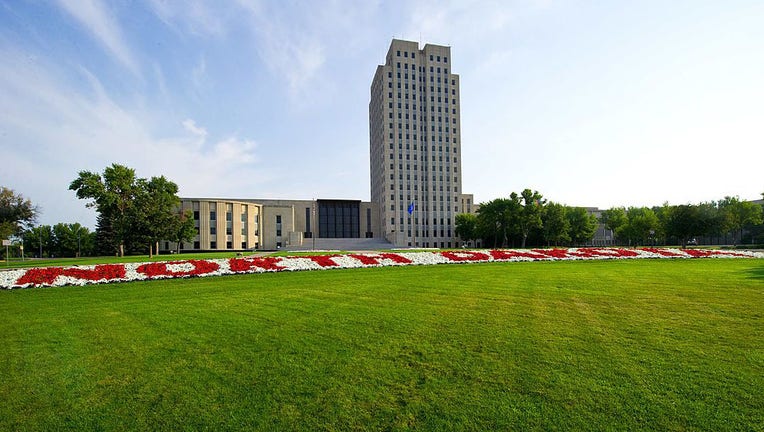 Photo of the state Capitol of North Dakota at Bismarck. (KAREN BLEIER/AFP via Getty Images)

BISMARCK, N.D. - North Dakota’s longest-serving state senator announced Monday that he would resign following a report that he had traded scores of text messages with a man jailed on child pornography charges.

Republican Ray Holmberg, who rose to become one of the state’s most powerful lawmakers in a career that spanned 46 years, said he would resign effective June 1. His term was scheduled to end on Nov. 30 and he already had announced in March that it would be his last.

"Recent news stories have become a distraction for the important work of the legislative assembly during its interim meetings," Holmberg, 79, said in a statement announcing his resignation. "I want to do what I can, within my power, to lessen such distractions."

Holmberg did not immediately return messages from The Associated Press on Monday. His attorney, Mark Friese, said he didn't have anything to add beyond Holmberg's statement.

Friese, a prominent North Dakota criminal defense attorney, said Tuesday that Holmberg hasn’t been charged with any crime, and there is no indication that he will.

GOP Gov. Doug Burgum said in a statement he "supports Sen. Holmberg’s decision to resign." He did not elaborate.
Senate Majority Leader Rich Wardner said he spoke with Holmberg earlier about his future in the Legislature.

"No charges have been brought against Sen. Holmberg at this time ... he felt it was in the best interest to resign at this time," Wardner said.

Days after the published report about his text messages, Holmberg had announced that he would step down as head of a powerful panel that oversees the Legislature’s business between sessions.

Prosecutors allege Morgan-Derosier possessed several thousand images and videos depicting sexually abused children. He also is accused of taking two children under the age of 10 from Minnesota to his Grand Forks home, with the intent of sexually abusing them.

Holmberg first told the Forum that he had read a newspaper story about the charges, then in a later interview said he had not, the Forum reported.

Holmberg has been one of the Legislature’s most powerful lawmakers for decades, serving as chairman of the Senate Appropriations Committee. He chaired the Legislative Management committee, which decides committee assignments and chooses study topics that often inspire legislation, four times.

He also sat on the state’s Emergency Commission, which allocates funding and resources in times of an emergency, and served on or chaired several GOP-led redistricting committees.

When he announced in March that this would be his last term, he said the stress of a session and a campaign would "only exacerbate a weakened ability to concentrate on the matters at hand and effectively recall events."

Many North Dakota Republicans, including Burgum, showered Holmberg with accolades at the time.

Holmberg will remain on the Legislature’s payroll through May and on its state-funded health insurance plan through July, a benefit that is worth about $1,425 monthly.