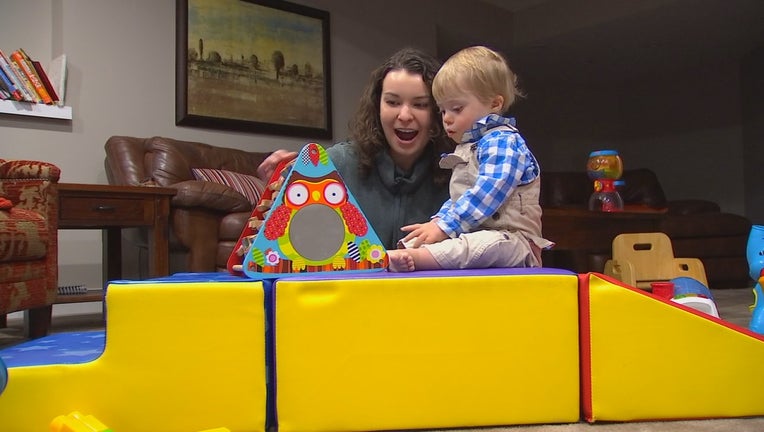 The Joshin app helps families connect with caregivers or "joymakers" who are specially qualified to take care of people with special needs.

SHAKOPEE, Minn. (FOX 9) - Finding quality childcare can be a hurdle for many families. For those with children who have special needs, it can be even more difficult.

A new service in Minnesota caters to families with disabilities, and the women who launched the company have a special reason behind their mission.

Finding quality childcare can be a hurdle for many families. For those with children who have special needs, it can be even more difficult.

At 18 months old, Felix Curfman is into everything. As a child with Down syndrome, however, he needs special care and attention when his parents are busy with their full-time jobs and his two older sisters.

Traditional babysitters aren't often equipped to handle a child with special needs. That's when Felix's mother turned to a new app called “Joshin” where families can find a caregiver or “joymaker” as they are called in the app.

“Knowing that he’s got not only the caregiver that we use now or the ‘joymaker’ we use now, but a whole host of them that we can pick from in the future is awesome,” said Sarah Curfman, Felix’s mother.

Joshin is set up almost like a match-making site, but for special needs care for children, teens and adults.

“With the Joshin app, you literally have qualified and screened caregivers at your fingertips—you can read about their educational background, their disability experience, their hobbies, their interests and someone who is a good fit for your family,” said Sarah McComb, Joshin experience manager.

“It’s been really fun to see him make his little milestones from scooting around to working on walking now," said Bugajski.

The story behind Joshin is personal. Twin sisters Melissa Danielson and Melanie Fountaine often cared for their older brother, Josh, who had several disabilities and passed away several years ago. Often, they would be the ones to watch Josh when they were young.

“We decided to look at platforms that were out there today and we found that none of them put families with special needs first,” said Melissa Danielson, a co-founder of Joshin.

The service is now available across Minnesota, Chicago and San Francisco. Plans to launch in more cities are in the works. It's already a game-changer for families like the Curfmans looking for a break.

"It makes our life do-able because, quite frankly, with three kids and two parents working full-time, you need some of that help," said Curfman.

Joshin now has around 500 users. It works through a subscription model and just last week it was approved for families to use Medicaid dollars. It's not just for children; you can find a joymaker for adults with disabilities looking for a companion.