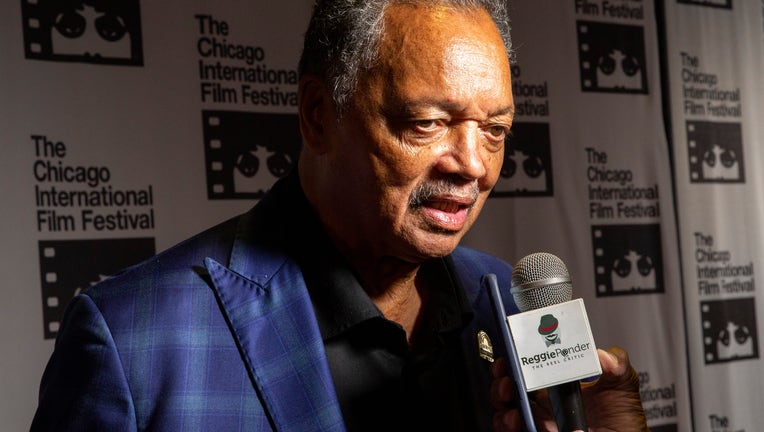 Rev. Jesse Jackson on the red carpet for "Punch 9 For Harld Washington" during the 57th Chicago International Film Festival at the AMC River East Theater on October 14, 2021 in Chicago, Illinois. (Photo by Barry Brecheisen/Getty Images)

CHICAGO - The Rev. Jesse Jackson was hospitalized Monday in Washington, D.C. after falling and hitting his head while helping Howard University students who are protesting living conditions on campus, according to a spokesman.

The 80-year-old Chicago civil rights leader was entering a campus building when he fell and hit his head, according to Jackson spokesman Frank Watkins.

Jackson’s staff took him to Howard University Hospital for various tests including a CT scan which came back normal. Watkins said Jackson would be kept at the hospital overnight for observation.

"Family, he’s resting comfortably and doing well," Santita Jackson, one of Jackson’s daughters, posted on Twitter along with a story from The Grio about his fall.

Jackson was attending a meeting with Howard President Wayne A.I. Frederick and the students, who were discussing their complaints about living conditions, according to Watkins.

Jackson, who has Parkinson’s disease, has already been hospitalized twice this year. He checked into a Chicago hospital for a breakthrough COVID-19 infection in August and required weeks of physical therapy as COVID affected his Parkinson’s and his ability to walk and talk. He also underwent gallbladder surgery earlier in the year.

Since being released from the hospital for COVID-19 treatment and physical therapy, Jackson has resumed an active travel and public speaking schedule.