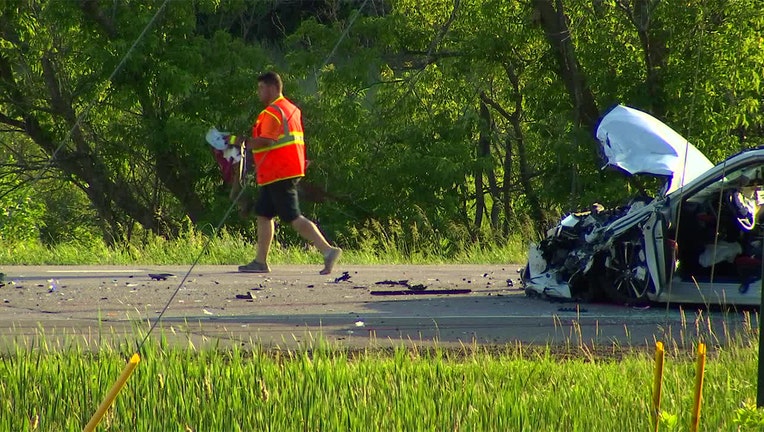 An infant is dead after a three-car crash in Isanti County last week that also injured 11 others. A GoFundMe has been created to help support the child's family.

(FOX 9) - An infant has died days after a three-car crash in Isanti County on June 30, which injured 11 others.

The Minnesota State Patrol responded to a crash involving three vehicles, including a Dodge Caravan, driven by a 19-year-old woman with five teenage passengers, and a Mazda CX-5 driven by a 28-year-old woman, with her two children, 6-week-old Hudson Sawyer Allen of North Branch, and a 2-year-old girl.

Both vehicles were traveling east on Highway 95 near 310th Avenue Northeast in North Branch Township around 4:45 p.m.on June 30 when authorities say the Mazda slowed down to make a left-hand turn, and the Dodge failed to take the bypass lane – striking the Mazda from behind, causing it to spin into oncoming traffic.

The Mazda was then hit by an oncoming Toyota Camry driven by a 71-year-old man. There were two additional passengers in the Toyota, another 71-year-old and a 4-year-old. The Dodge eventually wound up in the ditch and the Toyota in the westbound lanes facing east.

"Melanie, Brooke (2-years-old), and Hudson (6-weeks-old) were in a car accident. Melanie and Brooke were taken to a hospital in Minneapolis to be treated for non-life-threatening injuries. Hudson was airlifted to the hospital with severe head trauma and other injuries," read a GoFundMe campaign organized by the Ben and Melanie Allen Family. "Our sweet Hudson has gone to be with Jesus. Thank you for your continued financial and prayer support during this difficult time."

A celebration of life for Hudson, who died on July 3, will be held on Friday.

Footage from the scene of a three-vehicle crash in Isanti County on June 30 that injured 12 people, including an infant who suffered life-threatening injuries.