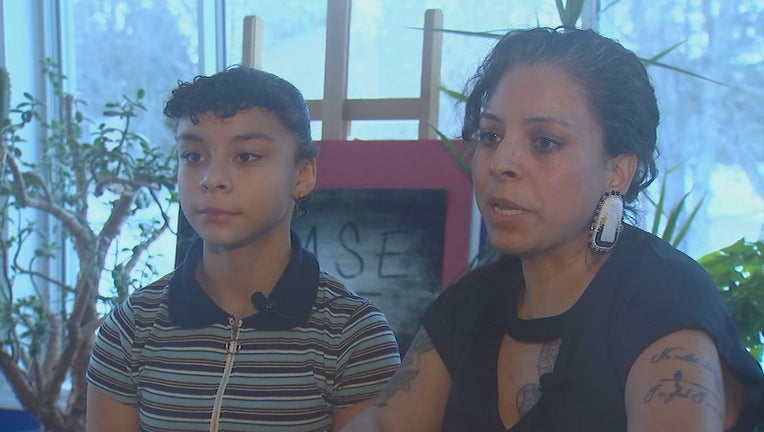 Ana Negrete and her daughter River speak with FOX 9. (FOX 9)

MINNEAPOLIS (FOX 9) - Ana Negrete’s daughter River goes to McGuire Middle School in Lakeville; and the family says it’s here, after school, that a tutor has left a permanent scar on River’s seventh-grade year.

"I was like confused at first, and like shocked," River said. She says it all started before Thanksgiving, when an after-school tutor scolded her, saying her family should celebrate the Thanksgiving holiday.

Ana Negrete’s daughter River goes to McGuire Middle School in Lakeville; and the family says it’s here, after school, that a tutor has left a permanent scar on River’s seventh-grade year.

River is Native American, and she says the conflict with the tutor heated back up on or around Jan. 5; with her tutor confronting her after school and referring to Native Americans as "savages who had killed her people."

"River said, ‘Hey, you know that’s racist right?' And she said something to the effect of, ‘Well, there’s a city named Savage, so it can’t be that bad," Negrete said.

Her mother spoke out about it at a Lakeville school boarding meeting on Jan. 10.

"Last week when I picked up my daughter from school I was outraged to hear what she had experienced in Lakeville Public Schools," Negrete said during the meeting’s public comment period.

Now, Negrete says she’s worked with the school on a plan to keep the tutor away from her daughter, "I don’t want her to have contact with my daughter," Negrete said.

"Lakeville Area Schools is committed to providing learning and working environments that are welcoming to all and does not tolerate discriminatory behavior. This matter was promptly investigated and appropriate measures taken to address it, including removing the employee from the after-school program where the incident occurred."

But the family says the employee now works in the library at River’s school.

Lakeville’s superintendent declined an interview with FOX 9 to talk about the situation, citing employee privacy laws.