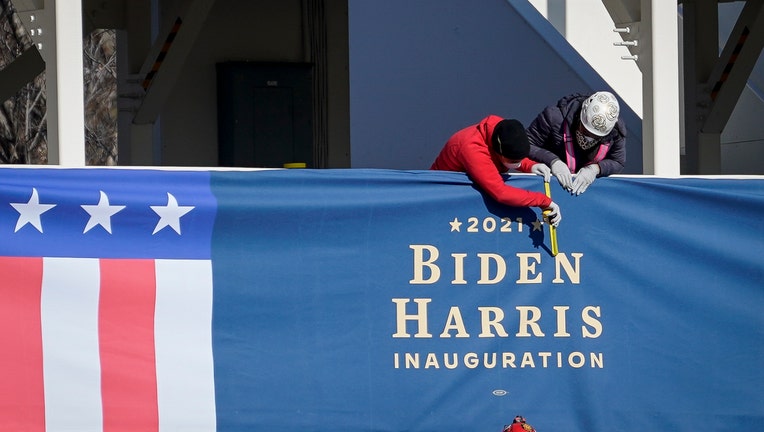 Workers put up "Biden-Harris" branded bunting on a press riser along the inaugural parade route near the White House on January 14, 2021 in Washington, DC. (Photo by Drew Angerer/Getty Images)

Several changes are in store this year as the country grapples with both the COVID-19 pandemic and heightened security after the Capitol riot on Jan. 6. Thousands of National Guard troops are stationed around Washington, D.C. limiting the public’s exposure to the events, though some events were already planned to be virtual.

Here is the preliminary schedule of events for the 59th Presidential Inauguration. All times are ET.

President-elect Joe Biden and vice president-elect Kamala Harris will be sworn in on the West Front of the U.S. Capitol building.

After they take their oaths of office, Biden will deliver his inaugural address.

RELATED: Inauguration Day 2021 will be like no other: What exactly is different?

Pass in Reviews are a military tradition to represent the peaceful transfer of power to a new Commander-in-Chief.

Biden and Harris will visit Arlington National Cemetery to lay a wreath at the Tomb of the Unknown Soldier.

Also in attendance will be Barack Obama and Michelle Obama, George W. Bush and Laura Bush, and Bill Clinton and Hillary Clinton.

Who is the prolific poet Amanda Gorman

Amanda Gorman will be the youngest poet to speak at the Biden-Harris inauguration.

Presidential Escort and Parade Across America

Biden will then participate in the presidential escort to the White House.

This will be followed by a virtual "Parade Across America," which will be televised.

Biden and Harris will also give remarks.